South Africa head coach Russell Domingo said Hashim Amla being out of touch lately has been a concern for South Africa.

Mumbai: South Africa head coach Russell Domingo on Saturday said star batsman Hashim Amla being out of touch lately has been a concern for the team ahead of the four-match Test cricket series against India starting in Mohali on November 5. The 32-year-old batsman managed just one run before being caught in the slips off a seamer on Saturday in the practice game against Board President XI here. The right-hander from Durban scored only 128 runs in eight matches recently in their tour of India in both T20 and ODIs. “Amla’s form has been a concern for us. But we know how big a player he is. After the match today we even see him practicing at the nets to get his balance and form right,” Domingo said at the post-match press conference here after the match was drawn. Live Cricket Scorecard: India vs South Africa 2015, 1st Test at Mohali

When asked about the set of players he will be going with in the upcoming Test series, the coach said, “We are yet to decide what set of players we will be going about with. We have to see the pitches and then confirm. But I think Mohali pitch will not be so much a turning track as history says.” Australia batsman Michael Hussey has been their batting consultant for a while and Domingo said the presence of the Aussie has come as a good influence on the side. “Mike is a great man. Influence of Hussey has worked and has fed very well with the squad,” he said.

In-form batsman AB de Villiers struck a superb 112 off 131 balls for his side on Saturday. Speaking on his batting, Domingo said, “AB has last played a Test against the West Indies in January 2015. We all know he is in a rich form in the limited overs. He wanted to get into longest format of the game and get used to it after a few months gap and he has done it well,” Domingo said. 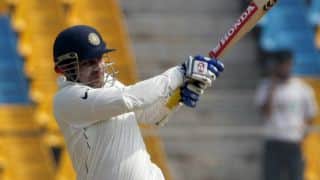 Virender Sehwag: Had I played more against Pakistan I would have scored 10,000 Test runs