Sheldon Cottrell blasted a six off the penultimate ball to give the West Indies a thrilling one-wicket victory over Ireland in the second one-day international at Kensington Oval on Thursday.

Sheldon Cottrell blasted a six off the penultimate ball to give the West Indies a thrilling one-wicket victory over Ireland in the second one-day international at Kensington Oval on Thursday.

Cottrell, best known for his fast bowling where wickets are celebrated with a flamboyant military salute, carted Mark Adair over cover for the winning runs as the home side lived on their nerves to finish on 242-9. The victory gave the West Indies a 2-0 lead in the three-game series after winning the opener at the same ground on Tuesday by five wickets.

Despite Cottrell’s headline-stealing flourish, it was fellow tailender Hayden Walsh who was his team’s saviour. In just his seventh one-dayer, Walsh, who started his international career last year playing for the United States, finished undefeated on 46.

“We are relieved about the win, we all put in the effort,” said West Indies man of the match Alzarri Joseph who took four wickets for the second game in a row as well as hitting a valuable 16 runs in a ninth-wicket stand with Walsh. “We wanted to bat sensibly and get to the score. The win means a lot to everyone, but it’s not finished, we have one game to go.”

West Indies had been cruising at 140-3 at one stage in pursuit of a 238-run target. However, a brief rain delay played havoc with their composure and three quick wickets fell for just eight runs.

Nicholas Pooran (52) and skipper Kieron Pollard (40) were dismissed without adding to their scores following the interruption having put on 64 for the fourth wicket. Pooran made his runs off 44 balls with six fours as the higly-rated left-hander completed a sixth ODI half-century.

He was clean-bowled by off-spinner Simi Singh with the score on 140. Pollard played a captain’s role, making 40 off 32 balls with two boundaries and four giant sixes. The 32-year-old fell to a fine caught-and-bowled by Barry McCarthy for the addition of two further runs. Khary Pierre (18), in only his third ODI, helped Walsh steady the ship in a 52-run partnership for the eighth wicket.

Earlier, opening batsman Paul Stirling top-scored with 63 as Ireland put up a challenging 237-9 off 50 overs on a wearing pitch. Stirling hit seven boundaries and one six as he claimed his 24th ODI half-century. Pace bowler Joseph finished with 4-32, identical figures from the first game, and also took two catches. He claimed the wickets of Stirling as well as the dangerous Kevin O’Brien (31) in an impressive spell. 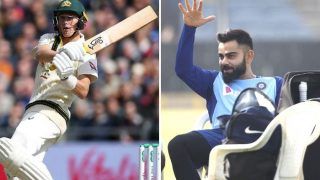 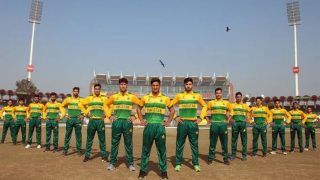