Dave Whatmore, who was sacked in May this year after Zimbabwe failed to reach the Super 10 stage of the World T20 in India.

Harare: Former Zimbabwe skipper Heath Streak has been appointed as the head coach of the country’s cricket team. He will succeed Dav Whatmore, who was sacked in May this year after Zimbabwe failed to reach the Super 10 stage of the World T20 in India. The 42-year-old was preferred over former team-mate Andy Blignaut and South Africans Peter Kirsten and Justin Summons, who were all interviewed for the job, ESPNcricinfo reported. Although Steak will continue his role as bowling coach for the Gujarat Lions in the Indian Premier League (IPL), he now also has a task in hand to ensure Zimbabwe qualify for the 2019 World Cup. ALSO READ: Heath Streak named consultant of UP Cricket Association Academy

Streak s first assignment will be a two-match Test series against Sri Lanka, starting from October 29 in Harare. The former batsman has previous experience as a head coach, having served a four-year stint as bowling coach of the national team between 2009 and 2013 before taking charge of the Bulawayo-based franchise Matabeleland Tuskers in the 2012-13 season. He also spent two years as the bowling coach of Bangladesh, before moving to the IPL.

The decisions were taken during the working committee meeting of UPCA, held at Mussoorie in presence of secretary and Director Rajiv Shukla. 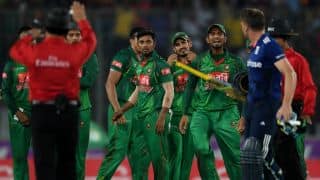 Bangladesh vs England: Mashrafe Mortaza refuses to apologise to visitors