An Indian summer in Australia is expected as the 'Swami Army' flocks to cricket grounds to watch their favourite cricketers.

It’s a summer’s day and the historic Sydney Cricket Ground is buzzing with chatter and excitement.

But instead of the green and gold of Australia, the huge and euphoric crowd filling the stadium is a sea of blue – the colour of India, prompting one TV pundit to ask: “Are we in Mumbai?”

They were in town for a recent Twenty20 international ahead of an anticipated four-Test series starting in Adelaide this week, where thousands of passionate fans, young and old, will turn up to catch a glimpse of their cricketing heroes.

“There’s probably more Indian supporters than Australian supporters here at the grounds so yeah, it does feel like a home game wherever we go now,” fan Kartik Ayyalasomayajula told AFP. “And I’m sure the players feel the same way, so it’s really exciting.”

The Sydney-based 30-year-old and his friends created the “Swami Army” supporter group in 2003 when he was just a teenager, and he has watched it grow to a global fanclub with 60,000 members.

“We love to travel around the country, the world to follow the team,” he said.

The carnival atmosphere inside and outside the grounds is infectious. Once a drum starts up or someone yells a chant, everyone joins in, singing and dancing on cue. The love they have for their superstar players is palpable. When captain Virat Kohli emerges or responds to supporters, they go into meltdown, and some passionate fans even burst into tears.

It is appreciated by the team, with opener Shikhar Dhawan calling the support “tremendous” and team-mate Krunal Pandya saying it “definitely” feels like playing in India.

“When you have home support, the way they were cheering, it is an added advantage,” he said.

Cricket was brought to India by the British in the 1700s and blossomed in the South Asian nation, said Australian sports historian Megan Ponsford. Ponsford, the grand-daughter of renowned Australian batsman Bill Ponsford, spent several years researching the team’s first cricket tour to India in 1935-36.

The Australians travelled there on a “goodwill” trip to help the Indians build a team that crossed religions and cultures ahead of their upcoming England tour. The wildly-popular sport has since emerged as a key unifier for the 1.25-billion strong population.

“In India there are so many different languages, religions and cultures that it’s the one thing that melds everyone together,” Melbourne-based fan Angadh Oberoi told AFP. “If it wasn’t for cricket, it’d be a very divided society, and it’s something that, when the cricket’s on… you don’t have to speak the same language, have the same religion. We all get together to support the one team.”

The size of the crowds and their confidence in “Team India” is also a reflection of the country’s emergence as an economic and cricketing powerhouse, Ponsford added.

A century ago, India was part of the British Empire and the English controlled cricket. Today, India is world cricket’s financial powerhouse and dominates the International Cricket Council, contributing 70 percent of its revenues.

In a meeting with Cricket Australia some years ago, Ponsford said it acknowledged that the rivalry with India was more lucrative than with traditional foes like England. “It’s important for the survival of Australian cricket that they keep on playing India,” she added.

Like any major rivalry, there’s been testy times. An infamous scandal in 2008, where Andrew Symonds accused Indian spinner Harbhajan Singh of calling him a monkey, saw relations between the foes hit rock-bottom.

There’s been repeated bust-ups, most recently last year in an ugly spat between then-skipper Steve Smith and Kohli. And the upcoming blockbuster series could signal a new chapter in their relations.

Smith and his deputy David Warner are serving bans over a ball-tampering scandal, and the Australians have since introduced a new code of conduct so they’re less aggressive.

Meanwhile India – the number one Test side – are hoping for their first-ever series win Down Under. If they do succeed, it will be a big reward for the diehard fans, whose regular chants of “we will win, we will win, India will win” in Hindi at the games will become a reality. 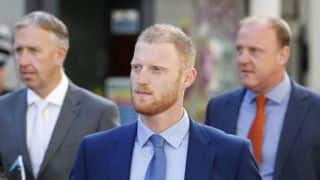 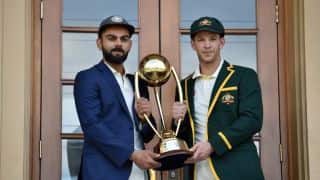