The second session s play will be very crucial from both teams perspective as it will make or break the winning hopes for either of the team.

Henry Nicholls (98) helped New Zealand post a total 354 handing over a slender lead of 65 runs against Bangladesh in the second and the final Test of the series at Christchurch. In their reply, Bangladesh are still trailing by 45 as they have reached a total of 20 for 1 at the stroke of lunch as they have lost the wicket of skipper Tamim (8). Soumya Sarkar and Mahmudullah are at the crease for visitors on 9 and 3 respectively. Earlier, Kiwi pacer Neil Wagner (22) played a vital inning as he and Nicholls scored 57 runs for the 9th wicket which ensured hosts surpass the Bangladesh total of 289.

Resuming the day at the score of 260 for 7, hosts were still trailing by 29 runs with Nicholls and Tim Southee at the crease batting on 56 and 4 respectively. But Southee (17) was the first wicket to fall on Day Four when the hosts were just 3 runs away from leading Bangladesh. Wagner who walked in at No. 9 played responsibly without dwelling in danger. Nicholls fell after adding 30 for the eighth wicket with Tim Southee and 57 for the ninth with Neil Wagner, both partnerships coming at more than four an over. It was the partnership with Wagner that helped hosts go past the visitor s total and take a slim lead of 65 runs.

It seemed like Nicholls would reach his maiden Test hundred comfortably given the way he was playing on Day Four. He looked in sublime touch. There were free-flowing drives, calculated late-cuts and apt use of feet against the likes of Shakib Al Hasan and Mehedi Hasan. It was in his nineties that the nervousness got him being cranky in the crease. He survived a close stumping call, top-edged the ball over the wicketkeeper but was eventually bowled by Mehedi as he tried to take the charge against the bowler by going down the track but chopped the ball on the stumps.

The second session s play will be very crucial from both teams perspective as it will make or break the winning hopes for either of the team. 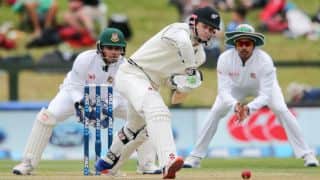 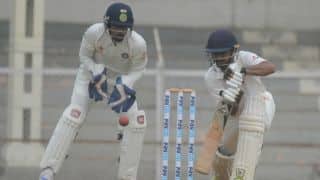