Virat Kohli has scored a hundred in every bilateral series since Bangladesh tour of 2015.

Virat Kohli‘s name is synonymous to records especially when it comes to the shorter formats. He has 30 ODI hundreds, second most after Sachin Tendulkar (49). Kohli has, without doubt, been India‘s best batsman in coloured clothings since the retirement Tendulkar, Virender Sehwag and Sourav Ganguly. Nonetheless, his bat remained silent in the ongoing five-ODI series versus Australia at home. In addition, this also becomes the first bilateral series since Bangladesh tour (in 2015) wherein the right-hander has missed out on a hundred.

Kohli’s highest remains 92 in the current series, and is batting on 35* at the time of publishing this report. Chasing 243 in the ongoing match versus Australia at VCA Stadium, Nagpur, India are comfortably placed at 223 for 1 in 39 overs. This makes it mathematically impossible for the Indian skipper to slam a hundred. Since the 1-2 series loss to Bangladesh in 2015, Kohli has featured in 6 bilateral series; missing out on Zimbabwe tour last year.

Kohli slammed hundreds in all the series, including the home series versus South Africa (2015), Australia tour of 2016, versus New Zealand and England at home, West Indies tour in June-July 2017 and Sri Lanka tour last month. Overall, he registered 8 scores in excess of three-figures from the 6 bilateral series; two each against Australia and Sri Lanka. 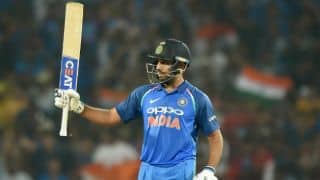