A month after he announced his decision to play T20s for West Indies again, Bravo has been picked for three matches against Ireland.

The West Indies have included allrounder Dwayne Bravo in their 13-member squad that will take on Ireland in three T20Is starting Wednesday. Bravo, who last played a T20 international for the West Indies back in 2016, had retired from international cricket last year, but had announced in December that he would like to be part of the team’s T20 World Cup title defense in Australia later this year and be available for selection.

With Bravo’s inclusion, the West Indies Cricket Board seems to have taken into consideration the allrounder’s request. With a plethora of experience in the format having played all around the world in league cricket, Bravo brings to the table the experience of having played more than 450 T20 matches, the second-most behind Kieron Pollard.

“Dwayne Bravo was recalled with the specific intention of bolstering our ‘death’ bowling which was identified as an area that really needs improving,” Roger Harper, CWI’s lead selector, said. “His record in this department speaks for itself. He will also be able to act as a mentor to the other ‘death’ bowlers and lend his experience wherever needed.”

In the T20 format, a specialist and experienced campaigner, Bravo has played 66 matches and has smashed 1142 runs at an average of 24.29 while has claimed 52 wickets. His best bowling figures in T20Is are 4/28. Bravo has not played for the West Indies since September 2016. His last international appearance was a T20I against Pakistan in the UAE.

“Once selected I’ll be fully committed to represent the region again in T20 cricket, which I think is exciting for West Indies cricket and fans, with the young talents around,” Bravo said.

Other notable changes in the squad include the absence of Jason Holder, who has been rested, and a recall for allrounder Rovman Powell. Fabian Allen and Keemo Paul who are nursing injuries, have been left out. 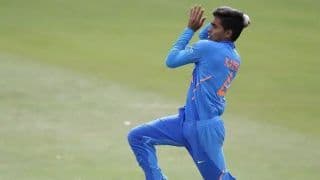