As India aim more a record run-chase, here's list of instances of 400+ run-chases.

Just over a month ago in December 2013, India were close to being at the wrong end of history when South Africa almost chased down 458 in the Johannesburg Test. But at Auckland, against New Zealand in the first Test, India could well create history by chasing down 407.  In fact India are not averse to chasing such a total. Back in 1976, at Port of Spain, Trinidad, India were set a target of 403 by West Indies. India got there comfortably and registering a six-wicket win.

It was a world record back then eclipsing the 1948 record of Australia chasing 404 against England at Leeds. The records was subsequently broken by West Indies when they chased down a target of 418 to defeat Australia in May 2003 at Antigua. Five years later, Australia found themselves once again on the wrong side of a successful run-chase, when South Africa defeated them in their own backyard chasing 414 at Perth in December 2008. 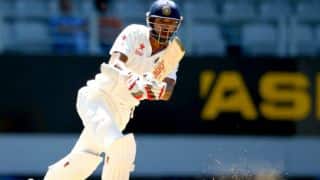