What’s in store for day 4 then? If we get full day’s play, we might stand a chance of having a result but another washout session would mean that that we are in for a draw. Let’s hope for the former and if that happens, England would have to bundle Australia quickly and score some quick runs to give a good enough total for Australia to chase. And obviously bundle Australia out, again. As far as the Aussies are concerned, they would want to bat out a couple of sessions tomorrow to keep an upper hand in the series.

Today’s play consisted of just one session but it was an eventful one as after a good start from Khawaja and Bancroft, Australia found themselves at 71/4. Smith and Wade held out until Lunch with Wade yet to get off the mark. The English bowled beautifully as they didn’t let any of the batters settle and were duly rewarded. Archer got his maiden Test wicket as he dismissed Bancroft and brought an end to the 49-run second-wicket stand. Broad and Woakes took one wicket each as well. 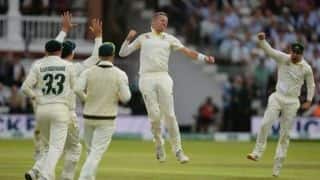