11:23 pm IST: And that’s the close of play. Another abosrbing day’s play. Chasing a total of 194, Indian may be five down, but India s great hope was steady as a rock against the disciplined bowling of James Anderson, Sam Curran and Stuart Broad, seeing his team to 110 for five at close of play on Friday, 84 adrift of the target.

10:30 pm IST: England working around Kohli and it is working for them. James Anderson induces an edge from Ravichandran Ashwin’s bat and India are five down for 78. Kohli, not yet the sorry figure -but soon could be – is not out on 30. India 78/5

10:05 pm IST: England take a review against virat Kohli. Umpire Chris Gaffaney ruled a Sam Curran delivery in favour of Kohli for height, but England too ktheir DRS because it was Kohli and the reviews show Gaffaney was right. India 63/3. England would know this is getting out of their hand slowly.

9:05 pm IST: Another one falls. Stuart Broad has his second. Both Indian openers back in the hut. India 22/2. Dhawan goes for the drive, he couldn’t resist it and taken by wicketkeeper Jonny Bairstow

8:55 pm IST: And Murali Vijay shoulders arm to an in-coming delivery and pays the price with his wicket. first blow for India. India 19/1 in chase of 194. Vijay out for 6

8:50 pm IST: And that’s a drop! And it is none other than Dawid Malan. Vijay pushes an away going delivery, Malan dives to his right but cannot hold on. Vijay survives. India 15/0

India’s successful 150+ chases outside of Asia

8:03 pm IST: Five-for for Ishant Sharma. Angled in and then seams away taking Stuart Broad’s edge and that is punced well at slips by Shikhar Dhawan. England 176 for 9. Lead India by 189. 8th five-wicket haul for Ishant Sharma

7:50 pm IST: And with another six, this time of Ishant Sharma, Sam Curran brings up his maiden Test fifty. What a game this young guy has had so far. 4 wickets and 24 runs in the first innings and then this potential match saving knock.

STAT ATTACK: Ishant Sharma has surpassed BS Chandreshekhar in the list for most Tests wickets for India. Ishant is at 243 wickets.

7:02 pm IST: And play has been interrupted by bad light. The floodlights have not taken its full effect. Welcome break for India or England? Will have to wait and watch. England 131/7, lead 144

6:55 pm IST: DROPPED! Genuine edge from Adil Rashid off Umesh Yadav but Shikhar Dhawan drops another. Dinesh Karthik made a slight moement to his right, that may have blinded Dhawan momentarily, but that’s a drop neverthless. England 130/7. The eighth wicket parternship for England between Rashid and Sam Curran has yielded 43 runs.

5:26 pm IST: Jonny Bairstow departs; Ishant Sharma gets one to move away from the right hander and Shikhar Dhawan gets hold of the chance at slips. England slip to 85 for 5.

5:07 pm IST: Ishant Sharma round the wicket and is squares up Dawid Malan. That wicket was coming. He goes for 40. England 70 for 4 and in trouble.

4:30 pm IST: Dawid Malan is living dangerously here. He edges one from Ishant, but that falls just short of Shikhar Dhawan at first slip. Third Umpire called in to action but the ball seems to have bounced just Dhawan got his fingers around the ball. To Dhawan’s credit he didn’t claim the catch.

3: 45 pm IST: 4th over of the day and Ravichandran Ashwin is up and running. He scalps Keaton Jennings for 8. Edged and taken at second slip by KL Rahul. Jennings came a long way forward to play the outside off delivery ,but the ball held its line and took the outside edge. England 26/2

India captain Virat Kohli made Dawid Malan pay for dropping him twice with a superb maiden Test century in England as the tourists bounced back in the series opener at Edgbaston on Thursday.

India were in danger of conceding a first-innings lead of more than a hundred runs at 182 for eight.

Then with what became the last ball of the second day’s play, off-spinner Ravichandran Ashwin bowled Alastair Cook for a duck with a brilliant delivery that drew the batsman forward, pitched on middle stump and turned to hit the left-hander’s off pole.

It was the second time in the match that Ashwin had dismissed Cook, England’s all-time leading Test run-scorer, in such a manner.

England were nine for one at the close, a lead of 22 runs.

Video: Records broken by Kohli during his 22nd Test century

Feature: Who is Sam Curran?

News: Jos Buttler in hospital for X-ray on injured finger

Stats: Milestones set by Virat Kohli during his 149-run knock

News: Not trying variations is working well for Ashwin in England, feels Harbhajan 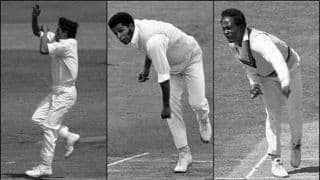