10:58 pm IST: Ravichandran Ashwin gets Alastair Cook for a record ninth time and that is the final action for the day. England nine for one in their second innings, lead India by 22 runs.

When you get to a hundred

9:55 pm IST: That’s Test hundred No. 22 for Virat Kohli. His maiden one in England. India 226/9. Tough innings this from the Indian skipper, he has his share of luck, but battled hard for 175 deliveries, and continued to do so. That’s his 15th Test hundred as a captain, equals Allan Border, Steve Waugh and Steve Smith for most centuries as captain for the number third position. South Africa’s Graeme Smith leads the tally with 25 and Australia’s Ricky Ponting is second with 19.

9:45 pm IST: Adil Rashid scalps Ishant Sharma and India are nine down with Kohli on 97*. Ishant goes for 5. And would you believe it or not, this is Adil Rashid’s second over only. India 217 for 9.

9:36 pm IST: Ishant Sharma is hanging in there with Virat Kohli and is adding valuable runs, more importantly furstration setting in for England

9:18 pm IST: Virat Kohli is getting a move on. Gets a two boundaries off Sam Curran and gets himself in to the 80s. He is doing a good job of keeping Ishant Sharma off strike as well. 200 up for India as well.

8:15 pm IST: And that’s tea. What an eventful session. England dominated but have handed Kohli two repreives. Kohli struggled, but fought and withered the storm to move to 53* at tea helping India to 160 for six, trailing England by 127 runs.

8:08 pm IST: Fifty for Kohli – his maiden one in England and off the next ball Dawid Malan has dropped Kohli once again at second slips. Tougher chance than the first, but a drop neverthless.

8:06 pm IST: Brilliant delivery from Sam Curran, full delivery tailing in to Hardik Panyda, hits his flush on the boot – in line of the stumps, Aleem Dar raises his finger, yet Pandya goes for the review but this time around he has to go. 48-run stand between Kohli and Pandya ends. India 148/6

7:47 pm IST: Virat Kohli seems to have withered the storm and has moved 42* which now is his highest score in England surpassing the 39 he made at Southampton in the 3rd Test in the 2014 series.

7:16 pm IST: What a spell this has been from the English bowlers post lunch. Ben Stokes has been on absolute fire, but the slip catching has been shoddy from England. Kohli was dropped by Dawid Malan off Anderson and in the next over Stokes was denied a Hardik Pandya’s wicket by Alastair Cook at second slip. India living dangerously. Kohli is on 27 off 73, Pandya unbeaten on 10*. India 116/5

When Stokes is on fire!

6:52 pm IST: Hardik Pandya survives. Ben Stokes win another inswinger but that dfrifts down the leg. Aleem Dar had given it out, India took the review and the ball was missing the stumps. India 100/5

6:46 pm IST: STUMPS RATTLED! Ben Stokes gets his 100th Test wicket and fuller one angling in. Dinesh Karthik had no clue about it. Beaten by length and for pace, he goes for 0. India five down for 100

6:38 pm IST: GONE! Ajinkya Rahane gone for 15 after guiding the ball to third slip off Ben Stokes. Tame dismissal. India four down for 100. Rahane was undecisive on how to play the back of length delivery and initally he commited to the shot but was late to withdrew as the edge flew to Keaton Jennings.

6:24 pm IST: Big moment. Ben Stokes trapped Virat Kohli in front with a big inswinger but the umpire is unmoved. An animated Jonny Bairstow runs to Stokes asking to take the review, so does Root, but Stokes decides against and guess what, the review would have meant curtains for the Indian skipper. India 92/3

6:10 pm IST: Second session proceedings underway – Ben Stokes starts with Virat Kohli on strike and he gets a boundary off the first over post-lunch.

5:31 pm: And that’s lunch on Day 2. Sam Curran hands England the advantage. Virat Kohli unbeaten 9, Ajinkya Rahane on 9*. India 76/3. On day one, it was Ravichandran Ashwin who won plaudits on a day that was supposed to be headlined by the pacers. On day two, with Indian batting – after Mohammed Shami ended England s innings at 287 with the fourth ball scalping Sam Curran – the battle was supposed to be James Anderson and Stuart Broad against India s top four. England did win the battle sending back India s top three inside the first 16 overs, but the damage was done by the seldom mentioned 20-year-old Sam Curran instead of the two decorated English pacers.

5:08 pm: Sam Curran you beauty! Shikhar Dhawan gone for 26. What a set up by the 20-year-old. Sqaured up Dhawan two balls earlier with a good length delivery that took the edge and flew wide of the third slip. Next one on middle and off, swining away, Dhawan lets it go and the third, full and swinging out and Dhawan goes for the drive, edges it to Dawid Malan at second slip. India 59/3

When you get the review right!

5:00 pm IST: GONE! Sam Curran gets his second. India’s new number three KL Rahul could only last two deliveries. He started off with a streaky boundary but chases a wide one with an angled bat and plays on to his stumps. India 54/2

4:57 pm IST: GONE! Sam Curran traps Murali Vijay in front. He goes for 20. Original decision as not out, but reviews showed the ball would have crashed in to the stumps. India 50/1

4:35 pm IST: Good going for India so far. After the early jitters, both Murali Vijay and Shikhar Dhawan seem to have settled in. Andeson got a couple of deliveries to nip back in but by and large the English pacers have been easy to bat against. Sam Curran has been brought in to the attack as the first change bowler. India 44/0

4:05 pm IST: It has been a nervy start by both the Indian openers. James Anderson seemed to have trapped Murali Vijay in front, but the umpire Chris Gaffaeny thought otherwise, so did the review. India 15 for no loss

India start with R Ashwin and Mohammed Shami on Day 2

IND vs ENG 1st Test, Day 2 Latest Updates: Hello and welcome to our live coverage of the India vs England, 1st Test, day two at the Edgbaston, Birmingham. India will be looking to get the remaining one England wicket, while hosts will be hoping that their last pair of Sam Curran and James Anderson can add a few runs in quick time.

It sure is a tricky sittuation as the England duo cannot hang around without scoring because they will know that the conditions early on will be suited for bowlers and they will love to have a crack at the Indian top-order early on. For India, the more the last England pair kept on the field, it could acutally play in to their hands as Murali Vijay and Shikhar Dhawan could have an eased out pitch to bat on.

At 216 for three, with just over two hours of play remaining on day one of the 1st Test against India at Edgbaston on Wednesday, England had the opportunity to drive home the advantage and take the honours on the opening day of the series. Joe Root had compiled his 12th fifty plus score against India in as many Tests while Jonny Bairstow was soon catching up to his skipper.

However, a mini collapse saw England slump to 224 for six. Root, Bairstow and Jos Buttler were back in the hut in a matter just five overs and India suddenly found themselves ahead in the opening day. And the visitors didn t let up. They chipped away and were rewarded with three more wickets in the session, taking the tally to six overall in the final session, restricting England to 285 for nine at close of play 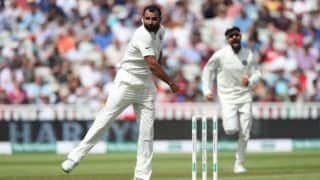