Be it what the situation is, Sehwag keeps supporting India while commentating.

Former Indian batsman Virender Sehwag retired from international cricket last year and since then he has been entertaining his fans through social media and commentary. When he is in the commentary box, one will get to know plenty of stories and he is probably the only cricketer to be straight forward with his words. No matter what the situation be, Sehwag keeps supporting India. Though commentators are not supposed to be biased, Sehwag barely cares about that and does what he feels. Listening to the commentary becomes equally entertaining as watching the match when Sehwag is in the commentary box.

Sehwag made his comeback to commentary after a long time with the ongoing second Test between India and New Zealand at Eden Gardens, Kolkata. Last time he did commentary was during the ICC World T20 2016 which was also his debut. He wasn t there at the commentary box during the first Test as he was playing a charity match in London. Well, since Sehwag s arrival in commentary box, both commentators and fans on social media have been praising him for his entertaining commentary.

During Day Two of the match, Sehwag was having a short session with his commentary teammates and anchor Jatin Sapru, where there was a fun banter going on for his incorrect predictions. He was being sledged and could not do anything. Talking about his comeback into the commentary box, Sapru asked him whether he missed them or not. Sehwag replied him instantly by denying it and that, in fact, he enjoyed a lot in London and also added that it was much better Kanpur.

Sehwag also shared dressing room stories in which he said that there is no point in being sad after getting out after playing a poor shot and instead they should make the environment more joyous. He also said that there has been no six hit by any Indian batsman, especially against a spin bowler like Jeetan Patel and according to him, batsmen should ‘drown and die’.

Sehwag is expected to do commentary during India matches in this long home season and if he is there, one can expect a lot of interesting stories and facts from him. 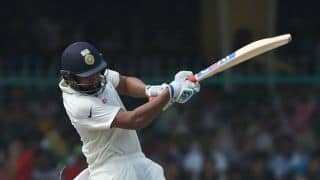