Himachal Pradesh dismissed Haryana for 163 after winning the toss.

Paras Dogra and Nikhil Gangta scored half centuries in Himachal Pradesh’s emphatic six wicket win over Haryana in a North Zone match of the Vijay Hazare one-day tournament on Saturday.

Himachal dismissed Haryana for 163 after winning the toss and chased down the modest target with 12 overs to spare. Dogra (71 not out off 106 balls) and Gangta (56 off 78) starred with the bat for the home team after the bowlers’ clinical effort led by young medium pacer Pankaj Jaiswal (3/23).

It was a welcome win for Himachal after the loss to Services in the opening game. For Haryana, it was a match to forget after a morale boosting win against a formidable Punjab on Thursday.

The wicket at the HPCA Stadium here usually assists the seamers and keeping that in mind, batting is never an easy task. The hosts wobbled in their chase initially, losing opener Prashant Chopra (0) and number three Ankit Kalsi (0) for nine runs in 2.2 overs.

It felt like anyone’s match after Raghav Dhawan (12) departed to make it 45 for three in the 11th over. However, Dogra and Gangta put up a 94-run stand to tilt the match in favour of Himachal. 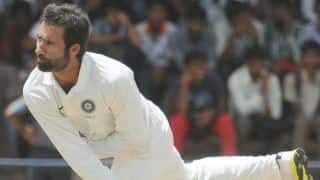