Sehwag took a subtle dig at Jadeja, who received INR 1 lakh money through Paytm wallet in form of prize money for winning the award.

Virender Sehwag and his love for making fun of cricketers on social media always makes the news. This time, instead of making fun, he had a special request for Indian all-rounder Ravindra Jadeja after the latter was adjudged the Man-of-the-Match in Mohali Test against England. Jadeja’s all round performance in the third Test against England laid the foundation of India’s victory by 8 wickets. Sehwag was surely happy with the performance of Jadeja and did not take much time in trolling him in his witty style and related it to demonetisation crisis after the latter received the award.

Recently, Prime Minister Narendra Modi had banned the INR 500 and 1,000 currency notes, introducing new notes of INR 2,000 and INR 500; an act which has created some problems for the citizens of India. Reacting to this, Sehwag took a subtle dig at Jadeja, who received INR 1 lakh money through Paytm wallet in form of prize money for winning the award. Sehwag first congratulated Jadeja and then took a dig at him by writing, ” Wah Jaddu Bhai ! Hamare paas toh 2000 ke chhutte nahi hai aur aap @Paytm mein 1 Lakh le gaye. Thoda hamare Paytm mein bhi transfer kijiye.” (Wow brother, we are struggling for change and you just got INR 1 lakh transferred to you account! Please transfer some money to my account now).

Sehwag is surely having some problem getting the change of INR 2,000 like other common people of the nation. Well, this was another typical Sehwag tweet from his official Twitter account but he missed to tag Jadeja. Had he tagged Jadeja, he could have got some money transferred from him.

Further, Sehwag continued with his pun on Twitter and wished Ross Taylor to get well, who will be getting operated soon.

Off to get my Pterygium removed pic.twitter.com/fVcFaVgME0 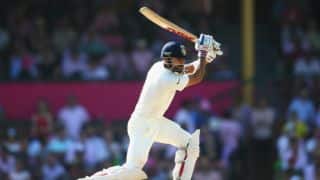