Rahul Dravid, who for the first time in his glorious Test career, posted two sixes in an innings jokingly said the sixes were in preparation for the next edition of Indian Premier League. 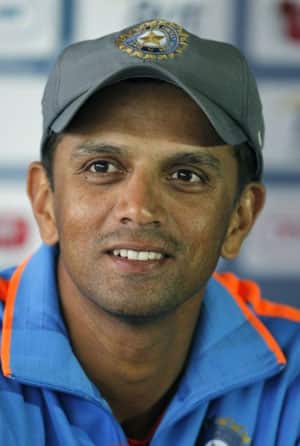 Rahul Dravid, who for the first time in his glorious Test career, posted two sixes in an innings jokingly said the sixes were in preparation for the next edition of Indian Premier League.

“Preparing for the IPL [laughs]. It was just there to hit I guess,”Dravid joked.

IPL is a kind of format where you are hitting shots all the time, most of the time. You are practicing hitting for six weeks. Maybe a bit does rub off but for me I find I can play at a good and quick pace when things are going well for me.

“There are lots of phases in my career when I am playing well and everything seems to flow. It s not about the six-hitting for me, it s about the ability to pick up length and get fully forward, get fully back and hit those boundaries that I sometimes I miss out on if I am not completely in the right place.”

Dravid scored his 36th Test ton to took India to a position of strength on day one of the second Test against West Indies.

When asked to compare his own batting in the context of Sehwag, Gambhir and Tendulkar, Dravid said: “Yes, I have my own unique style, and I focus and concentrate on it. It s not for me to compete with someone else or bat like someone else. What s best for me I have to work on that and it s got me success so I don t want to try and change it too much.”

The Indian batsman sounded optimistic when over Sachin Tendulkar scoring his 100th century.

“He is going to do it one day. Today was just a short ball and he was unfortunate to find the fielder. There was one fielder on the leg-side and he found him. He batted beautifully.

“He is timing [his shots] well. I thought that 70 in Delhi, he was really good under pressure. It s just a matter of time. Sometimes you get out; it s one of those things, he is just getting out. Sooner rather than later he is going to get that mark. I don t really think he is too bothered about it.”