Check out some best of the tweets from the cricket fraternity on the auspicious occasion of Holi.

The whole country is celebrating Holi and our beloved cricketers are also enjoying the festival of colours in different parts of the world. From our very own Twitter god Virender Sehwag to Virat Kohli to Rohit Sharma to Sachin Tendulkar and many more sent warm wishes to their fans through their social media accounts. Many contemporary cricketers have also sent across their wishes on this special occasion. Holi is festival which marks spring and is celebrated widely across India. One can see that cricketers have uploaded some colourful pictures of themselves and their team members. Full Cricket Scorecard: India vs Australia, 3rd Test at Ranchi

Some have also urged their fans to not waste water and scare the street animals during this festival. Amidst the tensions between India and Australia following Kohli-Steven Smith spat, Indian cricketers along with Australian players are seen enjoying the spirit of Indian festival. Brett Lee and Matthew Hayden headed to Mumbai to celebrate the festival, posting before and after selfies. India are thoroughly taking benefit of their break ahead of the third Test at Ranchi with their families and wives. Last year we saw all-rounder Glenn Maxwell enjoying with locals in Chandigarh during ICC World Cup 2016. This time Michael Clarke was seen smudged with colours along with the Delhi locals.

Let the colour of Holi spread the message of peace and happiness.Be safe & remember of not wasting water & being careful of our#HappyHoli

Happy Holi everybody. Have a great day today. Please make sure no harm is done to the animals on the streets. God Bless all. pic.twitter.com/3a3NbUib0a

Have a very Happy and a Safe #Holi everyone. Please take care of the silent ones. #HappyHoli #SafeHoli pic.twitter.com/pn7Upm8xJM

May this #Holi add more colours to your life. Have a happy & safe Holi! Also, a small request to save water 🙂 pic.twitter.com/aXUVQaDQ7l

Get ready mate ! Me and @HaydosTweets are on our way to cover Mumbai in colour ! Can’t wait #Holi2017 @StarSportsIndia https://t.co/BCMtVrjgo9

Happy Holi everyone! This is my before shot. Can’t wait to throw some colour going live on my https://t.co/ZPLlbGcmSl

Wishing you & your family a very happy and safe holi. Stay blessed

May God paint the canvas of your life with the most beautiful colors! Happy holi everyone #HappyHoli #Indianfestival pic.twitter.com/UeX4VApS46

Happy Holi! Have a safe and colourful Holi …

Bright colors,water balloons,lavish gujiyas and melodious songs are the ingredients of perfect Holi.Wish you a very happy & wonderful Holi. pic.twitter.com/8GOhNEdDBa

Happy Holi folks…. hope you enjoy the festival and the colours flow in to your lives !!! Stay Happy

I would like to wish everyone celebrating a very Happy Holi. Enjoy the Festival of Colours! #happyholi pic.twitter.com/OA3pp1LtNG

May the festival of colours spread joy, peace,happiness,wealth, and celebration in your life. #HappyHoli ! pic.twitter.com/K6h6uHpHRB

Wishing everyone a very happy and safe Holi. pic.twitter.com/Z86grw0waY

Happy Holi everyone. Hope you all enjoy your day. #festivalofcolours #festivaloflove https://t.co/wSjzP22P3X

The series on focus now is between India and Australia. The visitors are already hit by series of injuries starting with Mitchell Marsh and the latest one being Mitchell Starc. However, Marcus Stoinis and Pat Cummins have been called as replacements.

India-Australia third Test will begin on March 16 while the final Test will take place at Dharamsala starting on March 25. 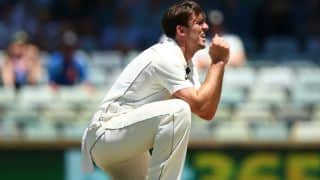