BJP's protection of HPCA was described as 'fishy' by the Congress in Himachal Pradesh.

“ There is something fishy the way the BJP is protecting the private company,” the Himachal Pradesh Congress Committee president told reporters.

He said the BJP must come clear on its involvement with the Himachal Pradesh Cricket Association (HPCA).

“Is it not true that the HPCA was a society when it got the land on lease from the government? Then how could it convert itself to the company and transfer the entire government land in the name of company that too without knowledge of the government,” he said.

The Congress leader said there was no provision for giving government land to a private company.

Sukhu said the Congress would go to the people with this issue in the election and question sitting BJP lawmaker Anurag Thakur, who heads the HPCA, that if the cricket body was to be converted into a company and had to run a hotel, then why did it not buy land like any other private company.

“Is it also not dubious that the HPCA first registered as a company in Kanpur and then in Chandigarh. And out of 25 life-members in the HPCA, 21 are from one family,” he added.

The vigilance and anti-corruption bureau filed a cheating and misappropriation case in August 2013 against the HPCA.

The state government last week got sanction to initiate proceedings against BJP leader and former chief minister Prem Kumar Dhumal for alleged wrongdoing in allotment of land during his regime to the cricket body led by his son Thakur, the joint secretary in the Board of Control for Cricket in India (BCCI), who is re-contesting the Lok Sabha election from Hamirpur in the state.

The BJP, however, denied any wrongdoing in the allotment of land for the players’ residential complex near HPCA’s picturesque stadium in Dharamsala, some 250 km from the state capital. 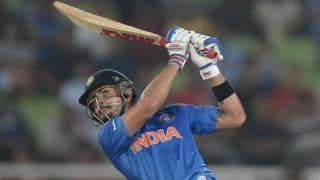