Kanitkar played two Tests and 34 ODIs for India, but was unable to establish himself in the side.

Former Indian cricketer Hrishikesh Kantikar has formally announced his retirement from all forms of cricket. He last played a First-Class match in 2013, scoring 52 for Rajasthan against Tamil Nadu.

Kanitkar told Cricinfo, “The passion for batting was still there but the motivation to be on the ground fielding for long stretches of time, even in a match, didn’t really exist. I didn’t want fielding to be a formality. If I am not able to give as much as a youngster is giving in the field, then I shouldn’t be pushing myself for a place in a side, so I took the call.”

Kanitkar played two Tests and 34 ODIs for India, but was unable to establish himself in the side. He is something of a legend in Ranji Trophy though, being one of only three men to score over 8,000 runs in the tournament. In 146 First-Class games, Kanitkar scored 10,400 runs at 52.26 with 33 centuries.

The left-hand batsman revealed that he was still keen on being associated with the game, perhaps as coach. “Coaching is something I am very keen on. If I get an opportunity to work with teams, it would be a great learning experience. I will also be keen to work as a cricket analyst in the media. These are the two things are on my agenda. It’s like after being a doctor for twenty years, you want to be a consultant after that. You can’t just turn the back on something that you have loved all your life.”

Though Kanitkar played most of his career for Maharashtra, he also turned out for Madhya Pradesh and Rajasthan. “I have had a great time. So many ups and down, but ups have been more than downs. I would like to especially thank the BCCI and all the state associations I played for — my home state Maharashtra, Madhya Pradesh and Rajasthan. It’s been a great life so far as a player. I am sure it will transform into a great life as a coach, as a commentator — whatever comes along.” 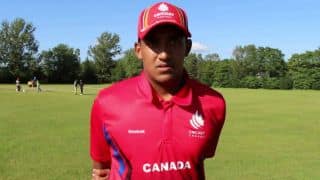