Hussain, Shastri in war of words over use of DRS

Hussain, Shastri in war of words over use of DRS

Former cricketers Ravi Shastri and Naseer Hussain were on Sunday engaged in a bitter war of words over the use of Decision Review System in the ongoing Test series between India and England following the umpiring howler in Harbhajan Singh's dismissal in the second match. 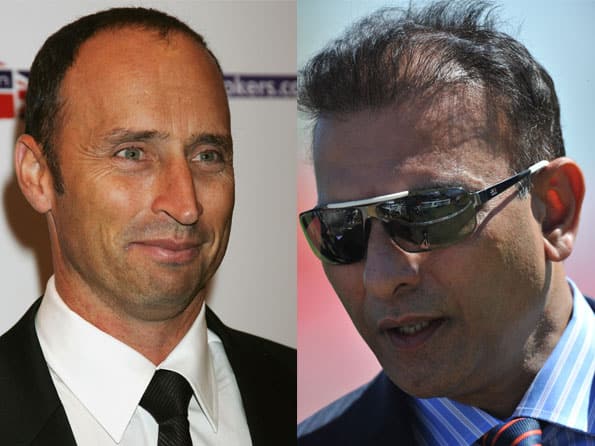 Former cricketers Ravi Shastri and Naseer Hussain were on Sunday engaged in a bitter war of words over the use of Decision Review System in the ongoing Test series between India and England following the umpiring howler in Harbhajan Singh’s dismissal in the second match.

Umpire Marais Erasmus gave Harbhajan out LBW for a duck for Stuart Broad’s second wicket on way to his hat-trick during India’s first innings on second day yesterday though the ball clearly edged the bat before hitting the pads.

Had there been LBW reviews, Harbhajan would have survived. Due to opposition from the Indian Cricket Board a modified DRS was used in the four-match series between India and England with the snickometer and hot-spot being used but not the Hawke-Eye to track the ball.

The BCCI was not comfortable with the Hawk-Eye technology used for LBW reviews as it feels it is far from foolproof.

Hussain slammed the BCCI for not making the full use of the DRS and called it a “disgrace”.

Shastri, a fellow commentator, while replying to a question on Star Cricket, made a scathing attack on Hussain, saying that England are jealous of India’s world number one status and BCCI’s big purse.

That was not all as on third day of second Test on Sunday, Shastri and Hussain clashed again while commentating together with the latter picking up from what was left yesterday.

“You also said that there was a jealousy factor about India going to be No.1. No one is more proud than me about India at top,” Hussain said.

“I have nothing against India. All I said is that had there been reviews for lbws, Harbhajan would not have been out. It was a howler. And if the technology is there to assist, why not take advantage of it. Who knows Harbhajan would have done what Stuart Broad did with the bat for England,” said the former England captain.

Shastri was not the one to back out and said he took exception to Hussain’s use of word “disgrace” as India has within its rights to refuse LBW reviews.

“You said, disgrace India not taking it. India has got every right to decide whether to take it or not. India decided not to take it because they don’t think it is foolproof. Technology is improving all the time and after seeing the way Hot-Spot has behaved, Hot-Spot has become cold spot. I think India has got every right to believe and do what they did.

“England were the last to adopt the DRS and now they vouch by it. India tested it three years back and they had a problem with it in the series against Sri Lanka. Yes, Harbhajan’s dismissal was a howler and it should not have happened,” Shastri said.

The clash between Shastri and Hussain came after former England captain Michael Vaughan kicked up a controversy, accusing VVS Laxman of using vaseline on his bat to avoid detection by the Hot-Spot technology after a caught-behind appeal against him was neither supported by umpire nor by DRS.

England’s hat-trick hero Stuart Broad later said that he even had a feel of Laxman’s bat to check if there was vaseline or any liquid in it but found nothing.

That led to former Indian captains Sunil Gavaskar and Sourav Ganguly slamming Vaughan for kicking up controversy unnecessarily, terming the comments by the ex-England skipper as “ridiculous” and aimed at a psychological game against the visitors.

Dhoni's withdrawal of appeal against Bell wins him fans

Majola likely to face charges over irregularities in IPL bonuses