Sindhuja Reddy, a cricketer from Telangana, has been selected to play for the United States of America (USA) Women s cricket team, which recently gained recognition from the International Cricket Council (ICC). A release from the information department of Telangana government confirmed that Sindhuja would play as a wicketkeeper-batter for USA s Women s cricket team. Sindhuja was also the captain of Hyderabad s under-19 cricket team. After shifting to the USA post marriage, the opening batter had almost quit the idea of continuing cricket but has now got a new opportunity to show her batting and wicket-keeping skills to the world.

Sindhuja has also represented Hyderabad in the Ranji Trophy and recently married Siddha Reddy, who lives in the United States, according to a release. She has also completed her B. Tech and MBA before moving to the US after her marriage.

While playing for the local clubs, Sindhuja performed considerably well and managed to impress the selectors with her skills both as a batswoman and a wicket-keeper. It was because of her consistent performances that she was able to cement her place in the American squad. Sindhuja s parents were delighted to hear about her selection. Sindhuja would be featuring in the qualifying match of the Women s World Cup, which will be played in Scotland, the release said. 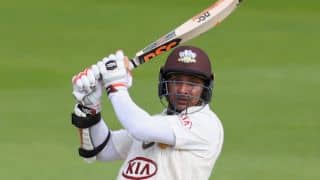