Plunkett believes he deserves to be a part of England's Playing 11 for the 4th and 5th ODI against Sri Lanka.

England fast bowler Liam Plunkett feels he deserves to be automatically drafted back into England s Playing XI for the fourth and fifth ODIs against Sri Lanka, after joining the squad following his wedding. Plunkett, who has been a regular feature in England s limited-overs set-up bagging 75 wickets in 44 games since the 2015 World Cup, missed the first three games of the five-match ODI series but hopes to play the remaining two games as England look to close in on a series win in Kandy.

In Plunkett absence, 25-year-old Olly Stone has impressed with his express pace, while Tom Curran, 20, picked up 3 for 17 as England went 2-0 up in the third game of the series. Speaking to Sky Sports, the 33-year-old mentioned that although he would love to give youngsters valuable inputs, Plunkett believes he deserves to be playing in the 11.

“I feel like a senior player,” Plunkett said while training on Friday. “I like to speak to the guys who have just come in and hopefully I can help them out. But, at the end of the day I still want my place back and I feel I deserve to be playing.

“The first day I got here I had a little bowl out in the middle but I did a lot of preparation when I was away – I tried to bowl 40, 45 overs a week so I feel in a good place. It’s just getting used to the weather and conditions. I have played so much cricket, been on so many tours in the past, so I am just preparing myself to play.”

Plunkett revealed that being in the international circuit for over a decade has helped him develop and evolve his game. Having debuted in 2005, Plunkett was a regular feature for England till the 2007 World Cup, before he was left out. He returned briefly onto the scene in 2010 and 2011 but wasn t able to cement his place. Then, based on supreme form during the 2014 County Championship, Plunkett was recalled in 2014 for a two-match series against Sri Lanka and has since become an integral part of the ODI team.

“When I first got in the team it was all about express pace, but I feel I have got better and better. When my speed is down I still have the capability of putting the ball in the tight spot and mixing up my variations,” Plunkett said.

“In the back of your mind you know someone will come in and do well, but that’s just sport,” he said. “It’s good for the team that people come in and do well. Hopefully I get the nod and play one or two games here but if not I’ll hopefully get a go again. If I don’t get the nudge I will graft hard. People forget for the first seven years of my England career, I didn’t play much, I was 12th man or 13th man the whole time. I know how to deal with the situation.” 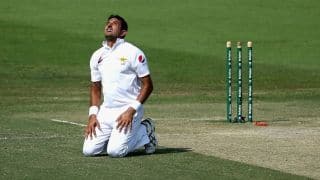