This is the third time an English player is involved in discipline issue inrecent times. Ben Stokes involvement in brawl outside Bristol nightclub and Jonny Bairstow s headbutt to Cameron Bancroft has already attracted controversies.

I’ve been through all that, so no, I don’t have a chuckle at that, Lehmann told reporters today in Perth. You have those situations at various stages throughout your career. It s not funny.It s a case of actually making sure you re trying the best you can to get your side prepared. For me, I don t have a chuckle at any of that.

When England coach Trevor Bayliss agreed he is fed up when asked about the outside incident.

“Very much so. I’m here to coach the team and I end up spending most of the time trying to explain behaviour that the boys have been warned about,” he said.

Australia are 2-0 up in the series and need only one win to regain The Ashes. However, Lehman says Australians won t take the Perth Test lightly.

For us we can t worry about what s going on outside with England. They’re still a good cricket side and have some dangerous players.For us, (Australia’s players) have got to be really switched on come day one in Perth.Hopefully a big crowd’s there and we have a great spectacle over five days, Lehmann added. 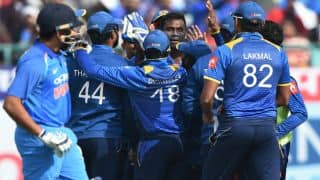