I have learnt to adjust to the fast pace of T20: Badrinath

I have learnt to adjust to the fast pace of T20: Badrinath

By his own admission, Subramaniam Badrinath takes time to settle when he comes in to bat but the star of India's Twenty20 win over the West Indies here says he has also learnt to pace up for cricket's shortest format. 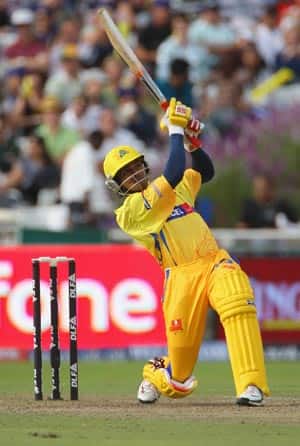 By his own admission, Subramaniam Badrinath takes time to settle when he comes in to bat but the star of India’s Twenty20 win over the West Indies here says he has also learnt to pace up for cricket’s shortest format.

After years of toil in domestic cricket and tons of runs, Badrinath is finally being seen as a batsman to turn to in any given situation and any given pitch and condition.

Badrinath is surprising a lot of people with his success in Twenty20 cricket even though he comes quite late to bat at the crease.

“I usually take time to settle myself in but I have worked out a theory with which I approach the urgency of Twenty20 cricket,” said Badrinath after his 43 runs earned him the man-of-match award in India’s 16-run win over the hosts in the only Twenty20 match of the series on Saturday.

“My initial attempt is to rotate the strike and I then employ this scoop shot to shift gears,” stated Badrinath.

“I followed the same theory into the middle today,” he explained.

The scoop shot which Badrinath mentioned is the rather inside out chip over the infield on the off-side to go with his powerful steers and cuts.

At 30, Badrinath is trying to make a late career for himself and yet doesn’t see himself an oddity in a largely young team with a similar goal.

“I don’t see it as a junior and senior kind of thing. All I want to do is to perform to my best,” he said.

Fate usually helps pure intentions and so has been the case with Badrinath, the latest instance being his innings on Saturday itself.

Ravi Rampaul had him caught at short extra-cover when Badrinath had 25 runs against his name in the 16th over.

“I had started to walk towards the pavilion when umpire asked me to stay put as the delivery had been referred to the third umpire for a suspected no-ball.

“As luck would have it, it indeed was a no-ball and I was relieved I could resume my innings,” he said.

Of the dozen more balls Badrinath was to face during his innings, he smashed three fours and ended up with a respectable 43 from 37 balls.

Badrinath batted at number four and this is the slot he would prefer if given a chance in the one-day internationals.

The first ODI on Monday will be his first game for India in three years. Over the next 12 days, Badrinath would be more than doubling the three one-day internationals he has so far played for India.

And there is every chance he would add a fair tally to his meagre total of 39 runs.

Gritty England have proved that they are the new Australia