If Sachin Tendulkar is hailed as "God of Cricket then for many Amitabh Bachchan is the "God the Indian film industry". A true global personality, Amitabh epitomises humility and grace despite his towering stature. 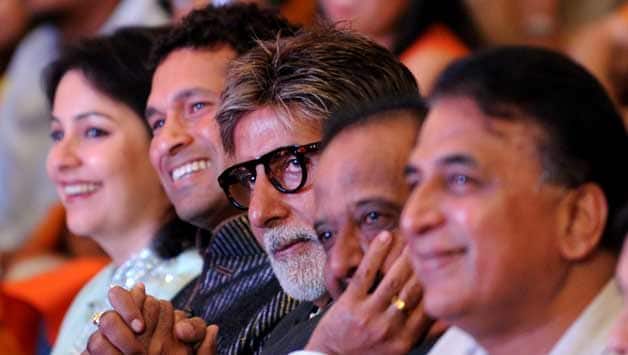 Amitabh Bachchan (centre) said he can never be compared to Sachin Tendulkar (second from left). For him, Tendulkar actually means India shining © AFP

If Sachin Tendulkar is hailed as “God of Cricket” then for many Amitabh Bachchan is the “God the Indian film industry”. A true global personality, Amitabh epitomises humility and grace despite his towering stature.

Yet, for man who has achieved so much, Amitabh had no hesitating in placing Tendulkar on a higher pedestal by hailing the Little Master as “the  ultimate Indian achiever”.

Speaking to Boria Majumdar for a Outlook magazine special to celebrate Tendulkar’s 40th birthday, Amitabh said: “I can never be compared to him to Sachin Tendulkar. To me, he actually means India shining. Every time there is talk of cricket in the world, we talk of India and we say so with a degree of respect and reverence.”

“This has largely been made possible by Sachin, who has excelled on the world stage and taken India to a position of pre-eminence because of his achievements over the last 24 years. When a performer does well despite adversity, he adds to the glory of his country. And that’s what Sachin has done for well over two decades. He has made us all proud as a result of his feats of individual brilliance: and we, as proud Indians, have taken pride in these feats of Sachin.”

Amitabh made special mention of Tendulkar the person as opposed to Tendulkar the cricketer. “As a person, Sachin is the exact opposite of Sachin the cricketer. If as a performer, he is dominant, aggressive and bold on the field, which are the hallmarks of a real champion, as an individual, he is humble, dignified and rooted. He has not forgotten his roots and that makes him a very special person. He comes across as someone who has not let success transform him, and this is indeed incredible, considering the scale of his achievements.”

“In fact, if you watch his expression when he walks back to the pavilion after he’s out, whether after a low score or after he is out for a century, you wouldn’t be able to tell the difference. He continues to epitomise the values of gentlemanliness associated with the game of cricket, values which we hardly see adhered to in cricket as it is played today. He is able to do so because his foundation (built on the values inculcated in him as an individual while growing up) is really strong and he has never wavered from following these principles and values,” says the Shahenshah of Bollywood.

Both Amitabh and Tendulkar have been leading performers in their respective fields. The longevity of both the individuals makes them perfect role models. “I don’t think I have achieved even half of what he has,” says Amitabh, who gets embarrassed when people compare him with Tendulkar. “It is about a very strong sense of self-belief, and it is also about being comfortable with the thought that you are not infallible and can make a mistake. Sachin knows that his is a quest for perfection. It will always be.”

“Every performance is. Yes, he fails on occasion, because even the best do. But the important thing is to retain the desire to keep learning and improve the next time you get an opportunity. That’s what he has been able to do over 24 years. Despite being the very best in what he does, Sachin knows that he can fail and that he isn’t invincible. No one is. At the same time, he knows that he can learn from a mistake and get better. And better. That’s what he has done all his life and that explains his longevity,” says the 70-year-old actor.

Amitabh thinks Tendulkar stands for excellence  of the highest order. “There is little doubt that he will forever be remembered as one who did the country proud on the biggest stage of all and stands for all that is pristine in sport, ethics and gentlemanliness.”

Tendulkar and Amitabh have never been predictable. They have always come up with new innovations in their respective fields. When asked about the reasons for not being predictable, Amitabh said, “It is difficult for me to say what I have done, but Sachin has constantly been able to innovate and add to his repertoire over the years. For example, the cut over the slips or the slash over the point, which often go for a six, are shots that have a Sachin imprint on them. It is as if he invented them to answer the questions the bowlers posed to him. This is because he has constantly been working on his game, trying to iron out flaws and add new skills to his already incredible range.”

“He has challenged himself and raised the bar every time he has gone out to perform. As I said, his is a constant quest for excellence even at this age, and that explains why he has never turned predictable or sterile. Like millions of my countrymen, I’d wish to see him play on for many more years, because Sachin brings out the best of emotions in me, still. I watch the game with bated breath when he bats and sometimes switch the television off when he gets out. And I am sure I am not the only one to do so. He has been a constant phenomenon in our lives for the last 24 years. I’d like to wish him all the joys for his 40th birthday, which is a milestone in itself!”

Sachin Tendulkar is the best of our era: Allan Donald