I made enemies by stopping Tendulkar from getting 100th ton: Siddle

I made enemies by stopping Tendulkar from getting 100th ton: Siddle

Peter Siddle, who helped Australia claw back into the match with the prize wicket of Sachin Tendulkar in last over of Day 2, said he definitely made more enemies after the Indian batting maestro missed out on his 100th ton once again. 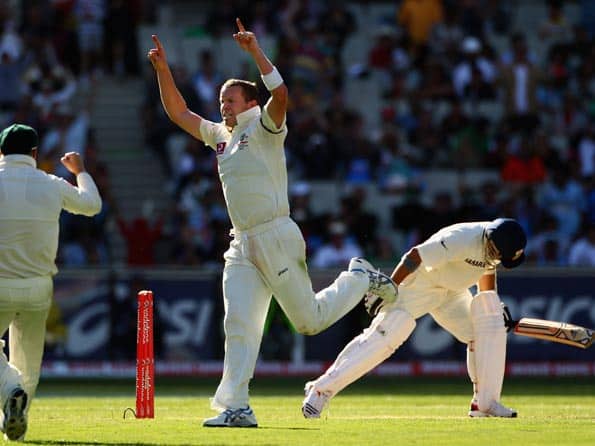 Peter Siddle (c) said getting through the defence of Rahul Dravid and Sachin Tendulkar, helped his confidence Getty Images

Peter Siddle, who helped Australia claw back into the match with the prize wicket of Sachin Tendulkar in last over of Day two, said he definitely made more enemies after the Indian batting maestro missed out on his 100th ton once again.

“Yes, sort of I did make enemies by getting Tendulkar out. Everyone I spoke to said that; well done but on the other hand I definitely got a lot of enemies, that s for sure,” Siddle was quoted saying in bcci.tv.

The local boy, who had earlier castled Rahul Dravid only to be denied the wicket on account of having bowled a no ball, said getting through the defence of such world class batsmen raises confidence.

The Victoria pacer, who had contributed a valuable 41 runs to the host s first-innings total, said getting through the defence of two of the world s greatest batsmen, helped his confidence.

“Yes, it does give me confidence. Dravid is one of those players, it s sort of hard to get through his gate and obviously to get Tendulkar later was also special. To pick Dravid s wicket, then for it to get taken back as a no ball still does give you the confidence that you can get through him.

“I got a chance to get him out that way. Good confidence to get Tendulkar at the end of the day. His wicket put us in a better position than we could have been so it s always a nice way to finish the day.”

Siddle’s bowling speed saw an increase after bowling Dravid off a no ball.

“I think so. I am feeling strong at the moment and so you get through the whole day; that s been a big positive. It is always disappointing to miss out on a wicket so it did pop me up a little bit and it gives you a fire in the belly that makes you get the next wicket. That did help, it s true.”

Siddle believed the pitch won t change much in the coming days.

“It might not be too bad. There s a little bit of grass on the wicket, there s still enough in there for a little bit of seam and movement off the deck. We ll see how we go. It s a matter of the opposition bowling well to get to you.

“If we get a couple of wickets early and use the new ball, [we] get a bit of movement, shape with that. It s going to be a big part of the day if we can get through that, get a few wickets. It should set us up nicely,” Siddle concluded.