It looked like the day once again belonged to the Kolkata Knight Riders (KKR) allrounder Andre Russell after he hit a 27-ball 62 against the Delhi Capitals (DC). But DC opener Prithvi Shaw had other ideas as he hit a classy 99 to overshadow Russell’s knock. (READ: Russell, Shaw set stage for Rabada epilogue)

While one would expect the youngster to rue missing out on his maiden century in the IPL, Shaw was disappointed that he couldn’t finish the game on Saturday here for DC and it stretched into the Super Over before Kagiso Rabada sealed the deal.

“I thought I missed the opportunity to finish the game for the team. Rather than scoring one run, I was looking to hit it big because I didn’t want the game to get this close. But the boys finished it off really well in the Super Over and I think we deserve this win,” he said.

After going all-out in the initial part of the innings, Shaw looked to have calmed down and the opener said it was an idea that the support staff shared with him.

“I spoke to my support-staff, Ricky Ponting sir, Sourav Ganguly sir, Praveen Amre sir and I figured out that I was going a little too hard early. After getting two fours in an over I was looking to do silly things. So I changed my plan and looked to take my time and hit along the ground,” he explained.

Shaw also felt that the pitch changed a bit towards the end of the DC chase and it was visible as Kuldeep Yadav almost turned the ball square.

“I think the pitch changed a bit, the bowlers’ marks opened up and Kuldeep and Piyush were getting good turn. Batting became difficult for us because their slower ones were working quite well, but we were looking to pick the singles and doubles,” he said.

Shaw sounded a warning bell as he walked into the dugout after the game.

“I have ten more matches to come and I am hoping to continue with the same intensity in the rest of them as well and give my 100 per cent,” he added. 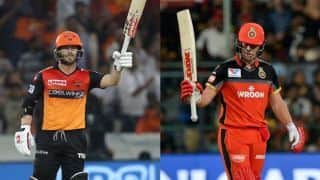