After his match-winning century against Pakistan on Sunday, Shikhar Dhawan said he wanted to make the best use of the batting-friendly conditions and so batted sensibly to make it count.

After his match-winning century against Pakistan on Sunday, Shikhar Dhawan said he wanted to make the best use of the batting-friendly conditions and so batted sensibly to make it count.

In their second match of the Super Four stage on Sunday, India defeated Pakistan by nine wickets at the Dubai International Cricket Stadium. Dhawan scored a magnificent century, his 15th in ODIs. Before being run out, Dhawan took Pakistan bowlers apart, hitting 114 off 100 deliveries with 16 fours and two sixes.

“I enjoyed my game. I’ve been in good touch and just wanted to make the most of it,” Dhawan said at the post-match presentation. It’s a good batting track and I have enjoyed the way I was batting. It was sensible and liked the balance of it.”

Talking about how he paced his innings, Dhawan said the plan was to settle in and not take unnecessary risks with the new ball.

“Pakistan have a good bowling attack and I knew that as openers we have to stay because they have got good pace and once I got set, I kept carrying on. As I said, I wanted to be sensible with my shots. I’ve thrown it away in the past and I have learnt the lessons the hard way. When you play 20 overs it gets easy. The plan was not to lose wickets in the first 10 overs and you might not get runs easily early on,” he said.

India captain Rohit Sharma also scored a century and remained unbeaten to see the chase through. Together, Rohit and Dhawan added 210 runs for the opening stand before being separated.

Dhawan said he has learnt to convert fifties into hundreds from Rohit. “Rohit played an amazing knock today and he’s very good at converting fifties into hundreds. I’ve learnt this from him. It’s good that we both value our wicket. We knew we shouldn’t be missing out on big knocks and I’m glad we did the job for the team,” the 32-year-old said. 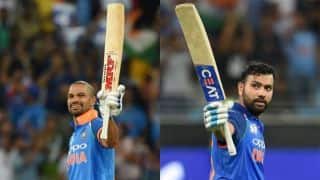