Pakistan speedster Umar Gul is set to kick up a storm as he has claimed that he saw English pacer James Anderson tamper with the ball last year during a Test match. 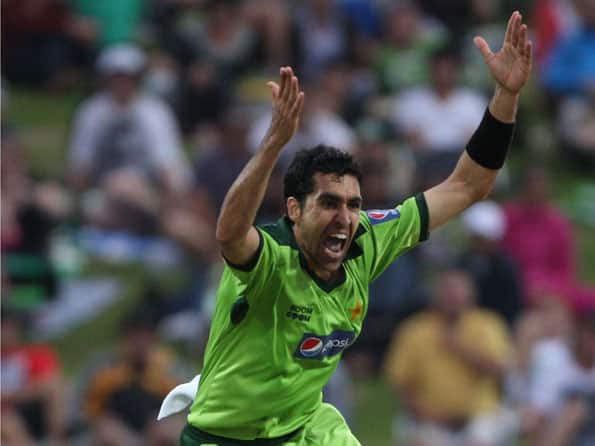 Pakistan speedster Umar Gul is set to kick up a storm as he has claimed that he saw English pacer James Anderson tamper with the ball last year during a Test match.

The seasoned pacer, who is tipped to make a comeback to the national side for the coming series against Sri Lanka, said ball-tampering was not new in international cricket and it was being done through legal and illegal methods by many bowlers and teams.

“I saw Anderson do it last year when we went to England.

Then in the Ashes series Stuart Broad was seen roughing up the ball with his boots. All these methods are part and parcel of the game to obtain reverse swing with the old ball,” Gul said.

“Most of the bowlers tamper with the ball in international cricket,” he added.

Gul’s comments that are likely to ignite a new debate came when reporters asked him about the remarks made by Shoaib Akhtar in his controversial autobiography recently released in India.

The retired fast bowler, in his book, has admitted to ball-tampering and claims it is common in Pakistan’s domestic cricket. Shoaib has called on the ICC to legalise ball-tampering. Gul said if Shoaib was saying he tampered with the ball he must have done it.

“I can’t say much on that but yes many bowlers do it.

When you use finger nails to scratch the ball it is illegal but when the fielders keep on throwing the ball on rough and dry pitches or the ball hits the advertising boards and sponsors signs, it is not illegal,” he said.

Gul said whether the ball was roughed up legally or illegally it remained an art to obtain reverse swing with it.

“Obtaining reverse swing is an art and must be recognized as one.”

But Gul didn’t agree with Shoaib’s suggestion to legalise ball tampering insisting this would spoil the beauty of the game.

“It should not be legalised because laws can’t be changed on this and it should remain an art.”

Gul, who has taken 125 test, 134 ODI and 47 wickets in T20 cricket, said Pakistani bowlers had always been accused of ball-tampering and it was nothing new.

“But in the past no match official has come up with any evidence against us nor has any camera caught us. This talk about ball tampering is not new to us. But reverse swing is something that comes naturally to us and it is an art passed down from generation to generation,” he explained.

Ball-tampering allegations have always surrounded the Pakistani bowlers and in 2000 match referee John Reid banned and fined Waqar Younis and Azhar Mahmood for tampering with the ball in Sri Lanka.

In 2010 in Australia, former captain Shahid Afridi was also banned by the ICC when he was caught on camera chewing the ball.

Shoaib Akhtar has also been penalised for ball tampering.

“I can’t say specifically that I saw Tendulkar running away from Shoaib but no one can deny that when Shoaib was at his fastest and best the world’s best batsmen were nervous against him and there is no batsmen who is not nervous or ruffled when facing a pure fast bowler.

“Even Brian Lara who I rate as the world’s best batsman admitted to feeling ruffled when he was hit on the helmet by a bouncer from Shoaib,” Gul said.(PTI)