Lara was impressed watching Prithvi score a hundred on his Test debut in Rajkot last year.

Prithvi Shaw‘s phenomenal talent has been much talked-about and the latest to join the bandwagon is none other than Brian Lara, who has found shades of “Virender Sehwag” in Mumbai youngster’s batting style.

Just like Sehwag, Prithvi is also a fierce cutter of the ball and his short-arm pull at times is a carbon copy of the ‘Nawab of Najafgarh’.

One of the greatest batsman to have ever graced the game, Lara was all praise for young Shaw’s approach. (ALSO READ: Don’t think scoring 99 in an IPL match can change World Cup selection: Prithvi Shaw)

Lara was impressed watching Prithvi score a hundred on his Test debut in Rajkot last year.

“I saw him play against the West Indies last October and he scored a lot of runs. It’s wonderful to see a young player on Indian soil doing so well. He travelled to Australia but unfortunately could not play, because of an injury,” he said.

He is only 19 years but with two seasons of IPL, he is already a “senior player”, reckons Lara.

“I think he has been in the IPL for a couple of years and is a senior player already. A lot is expected of him, he is in a big man’s game now and has got to do what is necessary.” 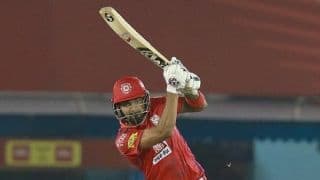