Former Australia skipper Ricky Ponting claims that he persuaded Rahul Dravid against retiring when he was written off after a string of low scores last year and the in-form Indian batsman has reciprocated the support by inspiring him during his lean patch. 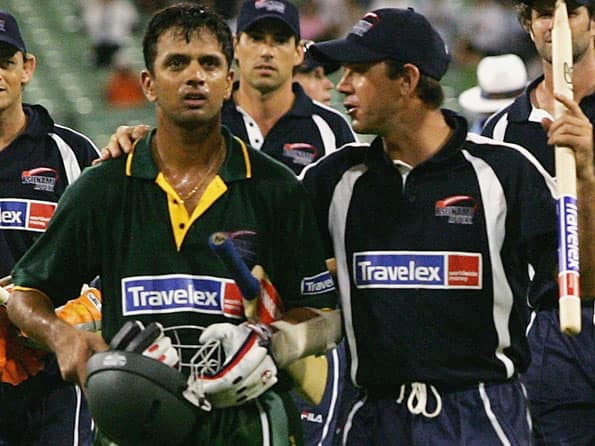 Ricky Ponting (R) felt players like Rahul Dravid are an inspiration for senior players like himself, as well as for youngsters Getty Images

Former Australia skipper Ricky Ponting claims that he persuaded Rahul Dravid against retiring when he was written off after a string of low scores last year and the in-form Indian batsman has reciprocated the support by inspiring him during his lean patch.

Dravid, the lone Indian batsman to perform well in with three centuries and 461 runs in the team’s recent 0-4 Test whitewash at the hands of England, was woefully out of form last year and Ponting said he encouraged the veteran right-hander carry on despite the criticism.

“I remember after our last series in India there was a lot of talk and speculation about Dravid being finished,” Ponting told ESPNcricinfo.

“I actually went and found him at the end of the series and said ‘don’t you even think about retiring’ because I just saw some stuff in a few of his innings that suggested he was still a very, very good player.

“I just said ‘don’t let them wear you down, don’t let them get you down’. I received a similar text message before and after the Ashes from him as well,” he added.

The 36-year-old Ponting has not scored a Test century since January last year but he is confident of regaining his touch and he is looking upto Dravid for inspiration.

“There are a few (who provide an inspiration for batsmen of advancing years). Sachin (Tendulkar) and (Jacques) Kallis both had a great last year; Dravid is doing well now.

“It’s not only good for guys of my age to see guys doing that, it’s good for the younger blokes to see it as well; to know that if you keep doing the right things and working hard, and if you’ve got talent, then age is not a barrier in our game,” he said.

Speaking about the state of the game in general, Ponting said he is worried about the impact of Twenty20 on youngsters.

“The big worry I’ve had about Twenty20 cricket and even other shorter forms of the game being played at really developmental times in kids’ careers is that it won’t teach them the art of concentration.

“Cricket for me when I was growing up meant batting until someone got me out and if that took them a week then that’s how long it took them,” he said.

“Now, even Under-17s and Under-19s are playing T20 games in national championships, and at the detriment of two-day games. Good state players these days are averaging 35; if you were averaging 35 when I was playing your dad would go and buy you a basketball or a footy and tell you to play that. So there are areas of concern there; I don’t know how you change them,” he explained.

Asked about India’s slide from the top of ICC rankings after the debacle in England, Ponting said it would be interesting to see how Mahendra Singh Dhoni’s men do once the veterans retire.

“India still haven’t reached that point that I thought they’d get to yet. They’ve still got that crux, those great batters in that side. Time will tell with India now. Dravid was probably one who was in the gun before the rest of them and he’s found a way to come through,” he said.

“They (Tendulkar, Dravid and VVS Laxman) are all about the same age and they won’t go on forever. They will be tested more than anything with their bowlers.

“I think we found even in the last few years that a lot of their spin bowling probably isn’t as strong as it used to be, and if you take Zaheer (Khan) out of their fast bowling stocks there’s not much left there either; so they’ve got an interesting couple of years ahead,” he added.

On whether India was focusing too much on Twenty20 and ignoring Tests, Ponting said, “They’re probably prioritising Twenty20 cricket as much as anyone aren’t they, with the IPL being based there and the commitment some players have to certain franchises and tournaments going on around that.”

“I reckon a good example of where their cricket is now is the fact they played RP Singh in that last Test match, when he hadn’t played a first-class game since January,” he explained. (PTI)