Best remembered for his match-winning 281 against Australia at the Eden Gardens in 2001, VVS Laxman has revealed he wasn't fit enough to play that Test.

Best remembered for his match-winning 281 against Australia at the Eden Gardens in 2001, former India international VVS Laxman on Thursday revealed he was not fit enough to play that Test.

“281 (against Australia in 2001) was a significant achievement as far as I am concerned because the situation we were in (that Test match). And also I was not fit enough to play that Test match. Hemang Badani was there in the physio room, when I walked into (former physio) Andrew Leipus, who actually I feel because of him I was able to play the Test match,” Laxman recalled at the Mumbai launch of his book 281 and Beyond, co-authored by R Kaushik.

Laxman said that his partner and former India batsman Rahul Dravid constantly motivated him through their partnership. Dravid scored 180 in the second innings after the hosts were asked to follow on by Australia.

India eventually went on to win the Test match by 171 runs and later the series 2-1.

“At the first place I was not going to the play the Test match and Andrew made me fit to take the field. It was a great opportunity for myself to go and just play my natural game. So that Test match was an important Test match, because I didn’t make runs in the first Test match (in Mumbai) and as it turned out I played my natural game, played on the merit of the ball, didn’t really think about what happened in the past or what’s going to happen.

“Credit to Rahul the way he kept motivating me at the other end and playing such a fantastic knock. But that partnership with Rahul was so important,” Laxman reminisced in presence of cricket icon Sachin Tendulkar.

Laxman also remembered the 167, which he scored against Australia in Sydney, saying that innings gave him confidence to play at the international level. “But having said that 281 never ever put pressure on me, because the first four years, while I was trying to fulfil the expectations of everyone, I forgot what I expected on my side (from me). And the tour to Australia in 1999-2000, changed that perception, changed my perspective and approach towards the game.

“The 167 (in Sydney) was a defining moment as far as I am concerned because that gave me the confidence that I can go and play against the best, irrespective of whether I am playing in India or in their own backyard and I belong to the international level.

“(So) 281, actually didn’t put any pressure on me, neither did I feel pressure when I walked out that people are expecting me to score 200 or 281, it doesn’t happen that way,” he signed off.

During the programme, Tendulkar shared several anecdotes of Laxman including from his first tour to South Africa. 3rd Test: Broad, Bairstow in as England opt to bat in Colombo 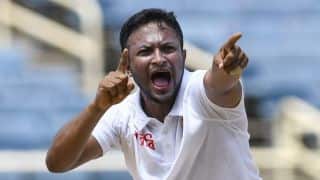