Allrounder Krunal Pandya’s debut Twenty20 International match turned sweeter with the wicket of experienced West Indies allrounder Kieron Pollard. The elder of the Pandya brothers was one of the two debutants (Khaleel Ahmed was the other) that were handed T20I caps for India in the first match at the Eden Gardens in Kolkata on Sunday.

In this year’s Indian Premier League, Krunal was bought by Mumbai Indians for Rs 8.8 crore. He justified his price tag – the most for an uncapped player at the auction – by scoring 228 runs at a strike-rate of 145.22 and claimed 12 wickets while conceding runs at 7.07 per over.

“I’m excited because I made my IPL debut also under Rohit’s [Rohit Sharma] captaincy. The good thing about his captaincy is he lets you express yourself freely, whether batting or bowling. He backs you all the time. I don’t have a preference about my batting spot. I’m ready to play wherever the team wants me to, it’s a team game after all,” Krunal said on Sunday before the match.

Krunal claimed his first T20I wicket in Pollard, his Mumbai Indians team-mate, who added just 14 to West Indies’ dismal batting innings that folded for 109/8. “It’s a proud feeling to get the India cap because I have dreamt of it from childhood. It was great to get Kieron Pollard’s wicket. He’s a very good friend of mine, I can say brother. I will definitely tease him when I meet him,” the Baroda allrounder said at the end of the first innings. 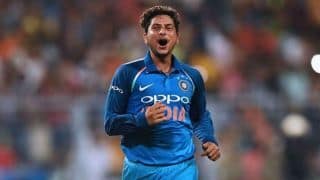 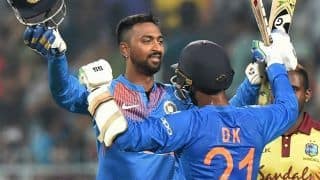