Bell was supported by Moeen Ali at the start, and Joe Root toward the end.

Ian Bell scored a tremendous 141 to lead England to 303 for eight against Australia in the fourth One-Day International (ODI) at Hobart. He was well-supported by Moeen Ali at the start and Joe Root in the middle overs as the English batsmen put the Australian bowlers to the sword. Bell had a tremendous match, going past 5,000 ODI runs, then becoming England’s leading run-scorer in 50-over cricket, and also getting his highest score in the format, all in the same match.

Bell and Moeen started off in thunderous fashion, hitting a slew of boundaries off Mitchell Starc, who looked markedly less effective than he did in the last two ODIs. Even Pat Cummins was not spared, as Bell took over the role of aggressor in the century opening partnership. The pair was finally separated with the score on 113, as Moeen played one shot too many, and holed out to substitute fielder Xavier Doherty.

James Taylor, batting No. 3, looked quite uncomfortable, and was unable to get going. He was dismissed for a 14-ball five, getting an attempted drive off the bottom of the bat. England were in danger of losing the plot after a good start, but new man Joe Root kept the runs coming at a fair clip as he and Bell first consolidated and then went for their strokes. The duo put on 121 for the third wicket, and though they slowed down toward the end, they managed to take England to a competitive total from which to kick on.

However, Gurinder Sandhu — playing only his second ODI after debuting against India — turned the tide in Australia’s favour with a double strike in the 42nd over, getting rid of Bell and skipper Eoin Morgan (for a first-ball duck). Bell was going for his shots, and was deceived by a slower ball from Sandhu. He was caught well by Starc for a superb 141 off 125 balls. Morgan was out for a first-ball duck, edging behind to Brad Haddin.

Jos Buttler came in to bat at No. 6 ahead of Ravi Bopara, and in partnership with Root took England further. Root in particular accelerated toward the latter part of the innings, but was out for 69 in the quest for big runs. He was out caught by Aaron Finch while pulling to Pat Cummins.

Starc then bowled terrifically at the death to strangle England, who at one point looked like they would go well past 350. He stifled Bopara in particular, who looked all at sea against the subtle variations in pace and length, bowling him in the last over of the innings for an agonisingly slow 16-ball 7. England finally ended around 20-30 runs short of what they would have expected when Bell and Root were batting.

Earlier, Australia won the toss and chose to field first. Steven Smith, captaining the side for the first time on debut, announced at the toss that there were three changes: David Warner, Shane Watson, and George Bailey had to miss out, and were replaced by Shaun Marsh, Cameron White, and Moises Henriques. England went in with the same side, as James Anderson became England’s most-capped player across formats in the process. 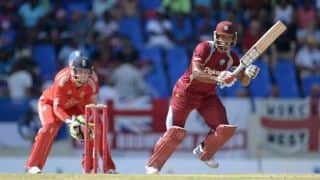