England batsman Ian Bell has publicly thanked India for recalling him after a controversial run-out during the Trent Bridge Test in August. 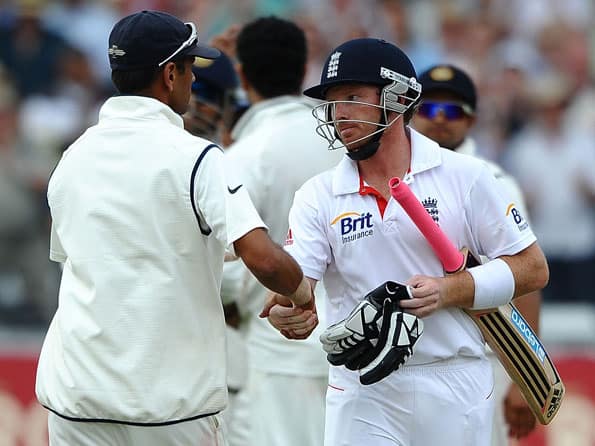 England batsman Ian Bell has publicly thanked India for recalling him after a controversial run-out during the Trent Bridge Test in August.

Bell, who could turn out against India for the third ODI in Mohali admitted that he made a mistake during the Trent Bridge Test by walking off assuming that ball was dead. Initially he was given out but later was recalled by India.

“It was an honest mistake. It was wrong to assume the ball was dead, and just to walk off was my fault. But, yes, I’m obviously grateful. If I could go back in time and the situation was different, I’d do it differently,” Bell was quoted as saying by the Daily Mail.

“I hope people understand that things like that happen in cricket. I think something similar happened to V.V.S. Laxman in the West Indies and he wasn’t called back, and the Indians were really annoyed about that,” he said.

“But they wouldn’t have changed the decision if they didn’t think it was the right thing for the game. Hopefully we can just move on,” said Bell.

Bell said he is desperate to cement his place in the ODI team.

“I’ve never really had that clarity of what I need to go out and do. I’m experienced enough to know how to go out and play one-day cricket, but I still don’t feel I know 100 per cent what my role is,” he said.

“So I’ve become that kind of player: ‘He can bat at six, four or he can open.’ Whereas others probably occupy specialist positions. In my 100-odd one-day internationals, I haven’t had a long string of games in one position. I’ve chopped and changing all the time,” he said. (IANS)

Resumption of international cricket in Pak must be top priority: Waqar