Out-of-form batsman Ian Bell Tuesday vowed England will look for improvement in the third and final Test after their abject surrender in the first two matches, saying defeats provide great time to learn. 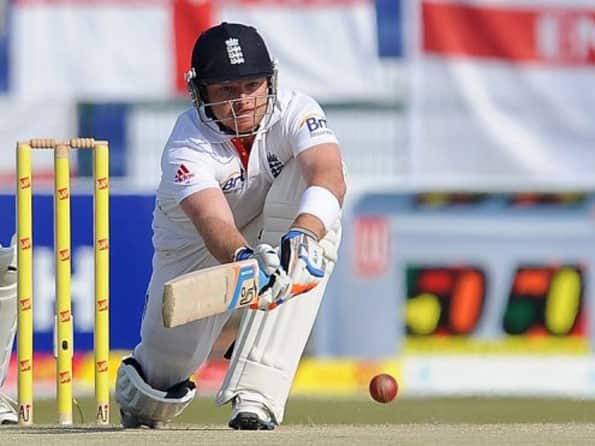 Out-of-form batsman Ian Bell Tuesday vowed England will look for improvement in the third and final Test after their abject surrender in the first two matches, saying defeats provide great time to learn.

The 29-year-old Bell was among the top-order batsmen who failed miserably in England’s ten wicket defeat in the first Test in Dubai and then in the 72-run loss in the second in Abu Dhabi — giving Pakistan an unassailable 2-0 lead.

Pakistani spinners Saeed Ajmal with 17 wickets and Abdul Rehman with 12 have destroyed the England batsmen in the two Tests, with Bell managing just 36 runs with a best of 29 in four innings.

Bell, who scored four hundreds with a best of 235 in the seven Tests at home last season, said everyone was looking for improvement in the third and final Test starting from February 3.

“We have had two bad Tests – and, of course, people are going to be asking questions. We have been in and out of form, and need to stay together and work hard. It’s a great time to learn and show improvement,” said Bell.

Bell stressed England, bowled out for 72 in the last innings of the Abu Dhabi Test after set a tricky 145-run target, will perform better.

“We are looking at areas we can improve mentally and technically. We are all hungry enough, and have scored runs in the sub-continent. So it’s not just negative stuff. We are looking forward to a better performance,” said Bell.

“Credit to the Pakistan spinners, they bowled exceptionally well, we knew they would be big challenge for us, we know that’s gone now, the series has been lost and we got a really important last game,” said Bell.

Bell said failure after scoring big last season was the most disappointing.

“It’s been disappointing, but also that comes with cricket, you know you have good times and you have bad times, generally things get a little bit easier the longer you are there, unfortunately I’ve got some balls early that have got me out.

“I’m desperate as ever to get some big runs in this last Test and as I’ve said we will all be preparing and training as hard as possible to make sure we get it right,” said Bell, who has so far scored 5063 runs in 71 Tests.

Asked whether there was a mental issue with the England batsmen, Bell replied: “I am not too sure about that, we’re always searching to get better, I think we’ve played some really good cricket all around the world, the last bit of the jigs is always playing well in the subcontinent.

“If you look at English cricket history we’ve never played great cricket in the subcontinent, we start to play very well cricket everywhere else in the world and this is the last little bit of hurdle that we need to get over,” said Bell.

England face more tests in the subcontinent when they tour Sri Lanka and India later in the year. (AFP)