BCCI is said to have asked ICC to reconsider the verdict given out on August 1 against Anderson.

England batsman Ian Bell has urged the two teams should focus on the on-field play in the finely poised five-match series as the action shifts to the fourth Test at Old Trafford starting Thursday. Bell, who stroked a masterful 167 in the third Test at Southampton help England comeback in the series with a 266-run win after the Lord’s loss, is looking forward to some exciting cricket.

“At 1-1 in three Tests and two matches to go, this is a great series. This is the kind of series you want to be involved in. The fourth Test should be exciting too because this is an exciting place to come and play (referring to Old Trafford). Hopefully it will be similar to the pitch we had in Southampton with a little more pace, which you do get here,” Bell said.

The series though has been marred by the James Anderson-Ravindra Jadeja saga from the drawn first Test at Trent Bridge when the English fast bowler was alleged to have pushed the Indian all-rounder.

The ICC’s judicial commission had dropped charges against both players, although the BCCI is said to have asked the governing body to reconsider the verdict given out on August 1.

“I have only just heard about that that now,” said Bell, referring to the BCCI?s request for a review of the verdict.

“Apart from this one incident, there hasn’t been any other incident on the field. I would even say that the chatter has been less than in other series and it has been played in the right spirit.

“Even if things are said, it is a tough environment out there in the middle. It shouldn’t go past the line, but in this series apart from that incident that’s been talked about a lot, nothing has.”

“The way Jimmy (Anderson) has handled it and got the man-of-the-match at Southampton with everything around the corner afterwards. It is great that he has been able to put it aside. I am sure all other players will do the same and we would rather focus on a good series rather than talking about one incident that got blown out of proportion,” the batsman added.

England witnessed a turnaround at Rose Bowl with Anderson’s 7-77 leading the way and halting the Three Lions’ 11-match losing streak since the summer of 2013. Skipper Alastair Cook also came to form with two fifties and Gary Ballance got his second ton of the series in a crucial partnership with Bell.

“It is definitely a weight off the shoulders but it is nothing to get carried away about. They were very good five days for us no doubt, but it is really important to back that up now in this fourth Test. One win isn’t going to change anything so it is important that we start well on Thursday and carry on,” said a cautious Bell.

“This past summer, some of us gave glimpses of playing well but we didn’t back it up. That was the good thing about Southampton that we did back it up on all five days, with both bat and ball. So it was pleasing and we have to do that again,” he added.

One name in particular caused India more trouble than others. It was indeed a surprise that batting all-rounder Moeen Ali recorded career-best figures of 6-67 to spin webs around the Indian batsmen as they were sent crashing to 178 all out in the second innings.

“Moeen has really progressed a lot in the short time he has been the team’s sole spinner. And he will only get better as he plays more. The key thing for him has been to understand his role. He will not always bowl to his strengths. Sometimes he will have to play the holding role and back up the seamers.

“He did that very well at Lord’s and in this series I think he has understood his roles very well, and now prepares in the nets accordingly. It is very important for him to do so because we will be playing all across the world on different surfaces,” opined Bell.

“We are all really desperate to carry on from last week.

But India have some real quality as well. They also have some guys who haven’t come out and performed so they will be desperate to do that,” he added. 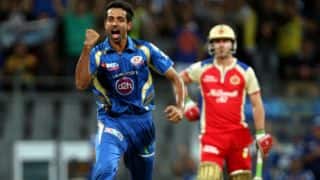