England cricket legend Ian Botham was cheered on by hundreds of Sri Lankans on Friday as he began a 100-mile trek from the island's war-ravaged north to its tsunami-battered southern coast. 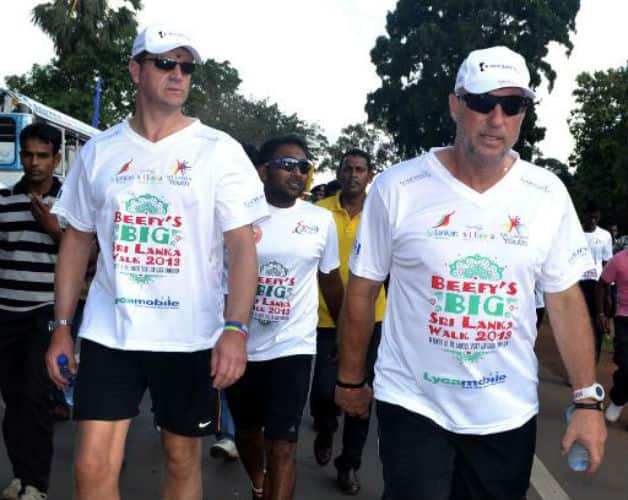 England cricket legend Ian Botham was cheered on by hundreds of Sri Lankans on Friday as he began a 100-mile trek from the island’s war-ravaged north to its tsunami-battered southern coast.

The Englishman promised to combat the sapping heat with plenty of night-time “rehydration” before he set off from Kilinochchi, a key battleground in Sri Lanka’s 37-year ethnic war.

Botham has completed 14 previous charity treks in his homeland but this is his first such adventure outside Britain and is intended to raise money for disadvantaged children, both in Sri Lanka and elsewhere.

Kushil Gunasekera, one of the organisers, said around 2,000 fans had cheered Botham off from the starting line in Kilinochchi where he took part in the toss at the beginning of a cricket match.

“He tossed [the coin] at a schoolboy cricket match in Kilinochchi in the morning and started his first 20-kilometre leg of the walk,” Gunasekera told AFP while taking part in the walk.

The 57-year-old Botham is planning to walk 20 kilometres every day, making a total of 160 kilometres (100 miles), before he reaches the coastal village of Seenigama on November 8.

On some days, he will be driven between towns and he acknowledged in a press conference on Thursday that he had revised plans for a longer journey due in part to the sweltering conditions.

“It is considerably shorter than most walks,” Botham said.

“But, we have to factor something else. It is the heat and humidity. There will be a lot of rehydrating to be done in the evenings.”

Botham, who has raised more than US $20 million for charity with his walks since 1985, has been a frequent visitor to Sri Lanka as a player, television commentator and goodwill ambassador.

The former all-rounder visited soon after the December 2004 Asian tsunami, which killed more than 31,000 people on the island and devastated much of its coastline.

And in March 2011, he visited Sri Lanka’s northern region, nearly two years after the end of a Tamil separatist conflict in which more than 100,000 people were killed.

Proceeds from the Sri Lanka walk will go to the Laureus Sport for Good Foundation, which funds charitable activities in 34 countries.