The IPL is too powerful for the long-term good of the game.

Ian Botham‘s comment on the Indian Premier League (IPL) has taken a toll on the IPL fans across the world. They lashed out at Botham on the social media platform Twitter. A day before he had commented that England needs to play more attacking cricket and on the very next day he said that IPL should be abolished.

Botham had said on Wednesday that the IPL was “too powerful” for cricket’s long-term good as he called for the lucrative Twenty20 domestic tournament to be scrapped. Delivering the MCC Spirit of Cricket Cowdrey Lecture at Lord’s, where he was once a ground-staff boy before going on to star at the ‘home of cricket’ for both Somerset and England, Botham also expressed his fears about the IPL’s effect on corruption within the world game.

“I’m worried about the IPL — in fact, I feel it shouldn’t be there at all as it is changing the priorities of world cricket,” the 58-year-old former England captain said. “Players are slaves to it. Administrators bow to it.

“How on earth did the IPL own the best players in the world for two months a year and not pay a penny to the boards who brought these players into the game? “I know this has been modified to a degree, but it is still an imbalance. The IPL is too powerful for the long-term good of the game.

“Corruption is enough of a problem in itself, but the IPL compounds that problem given it provides the perfect opportunity for betting and therefore fixing.” Botham, one of cricket’s greatest all-rounders, added “We have seen a few players exposed, but does throwing the odd second XI player into jail solve it?

“To kill the serpent, you must cut off its head. The ICC (International Cricket Council) Anti-Corruption Unit must pursue the root of the problem and if necessary expose the big names.”

Another example of Ian Botham being a prize idiot http://t.co/kS88jQMwp2

Ian Botham says #IPL should be stopped. Little does he know that England could defeat India only because of IPL

Former players (like Ian Botham) divided over IPL, opposition to League from current players negligible. How does one read this?

I don’t like #IPL either but would @BeefyBotham have turned down its millions if offered to him? #cricket 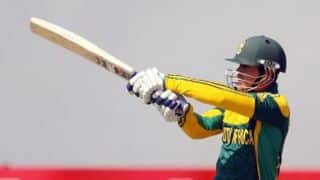 Quinton de Kock dismissed for 2; South Africa 2/1 after the first over