Former Australian skipper Ian Chappell has slammed the Board of Control for Cricket in India (BCCI) for "muzzling" commentators over the controversial DRS and said he won't be working under the terms of BCCI during the seven-match One-Day International (ODI) series between India and Australia starting Sunday. Former Australian skipper Ian Chappell has slammed the Board of Control for Cricket in India (BCCI) for “muzzling” commentators over the controversial DRS and said he won’t be working under the terms of BCCI during the seven-match One-Day International (ODI) series between India and Australia starting Sunday.

The Indian Cricket Board has laid down three topics and one of it bars the commentators to not speak a word about the Decision Review System (DRS) The BCCI has asked the commentators of its production unit such as Sunil Gavaskar, Ravi Shastri, Laxman Sivaramakrishnan and Matthew Hayden to not utter a word on DRS, Indian selection and administration.

A stalwart of Channel Nine‘s commentary team, Ian Chappell, himself, feels DRS as a “load of rubbish” but he said he will not work under the terms of the BCCI.

“I can’t do my job properly under those circumstances,” Chappell was quoted as saying in the Sydney Morning Herald.

“In the studio for Nine [during the Ashes], I made a number of comments about the DRS and what a load of rubbish I thought it was. I’m even more convinced of that after the Ashes. I know that the Indian players, Tendulkar in particular but I think there’s probably more than that, don’t trust it. I think Jacques Kallis is on record as saying he doesn’t trust it, and from my experience I don’t trust it, either.”

The 70-year-old also questioned whether television umpires were trained enough to use video technology.

“Administrators say to players, ‘Do you want more technology?’ What they don’t explain to the players is there’s a human hand in there that is subject to the same thing as an umpire’s decision — human error,” he said.

The report mentioned that former India cricketer and commentor Sanjay Manjrekar was dropped from the Indian production’s world feed because he questioned the board’s respect for the Future Tours Program.

Chappell said it was disgraceful that Indian commentators were gagged from expressing their views when the IPL spot-fixing controversy erupted and it is better to sack them than muzzling them.

“If you don’t like what I’m saying on television, sack me,” Chappell said. “You’re short-changing the public, and you’ve got your own credibility to consider.” 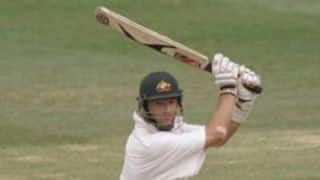 Ashes 1993: Mark Waugh, the Mozart of the willow, scores scintillating 137 at Edgbaston