West Indies along with nine other sides will feature in the World Cup 2018 qualifiers starting next month in Zimbabwe.

West Indies along with nine other sides will feature in the World Cup 2018 qualifiers starting next month in Zimbabwe. Two teams out of the 10 will make it to the World Cup 2019 which will be held in England.

Afghanistan, Zimbabwe and Ireland will be major attraction along with West Indies in the qualifiers. These teams failed to make it in the top eight ICC ODI team ranking. Hong Kong, Netherland, Scotland and Papua New Guinea who finished top four in the ICC World Cricket League Championship will also be a part of the qualifiers.

Teams like Canada, Kenya, Namibia, Nepal, Oman and United Arab Emirates will fight for the remaining two spots in the ICC World Cricket League Division 2 (WCL Div.2) The finalist of the league will take part in the qualifiers.

The 10 teams will be divided in two groups where each side will play other team in the group at least once. The top three will make it to the Super Six stage. The finalist of the Super Six stage will qualify for the World Cup 2019.

Zimbabwe will feature in the opening match of qualifiers on March 4. 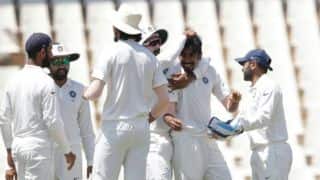