Rashid picked up 60 wickets in the year, which is a record for any associate nation bowler

With his staggering performance in 2017, Afghanistan‘s Rashid Khan bagged the Associate Player of the Year award in ICC Awards 2017. Rashid picked up 60 wickets in the year, which is a record for any associate nation bowler. Also, his 43 ODI wickets is a record for teams which have not played any Test. Apart from international cricket, Rashid has also impressed in many domestic T20 leagues such as BPL and IPL to become a household name across globe. Rashid, who idolises Shahid Afridi, can be called one in making as he comes in handy as a lower order batsman.

“I am really honoured and happy to get the award of ICC Associate Player of Year 2017. It is a very honourable and happy moment for me to get this. No doubt the way I performed in 2017 was memorable. I had lots of memories in that. I really enjoyed myself in 2017. Even I am in Australia for the [Adelaide] Strikers and the way I have been followed by the people, the fans [is great]. It is amazing getting fans all over the world. I am so happy for 2017 [sic],” Rashid told ICC about getting the award.

ICC Associate Cricketer of the Year

Along with Rashid in the nominations were Scotland’s Kyle Coetzer and Ireland’s William Porterfield. Coetzer had scored 390 runs in 2017 in the eight matches he played. Porterfield, on the other hand, scored two centuries in 2017 and averaged 43. 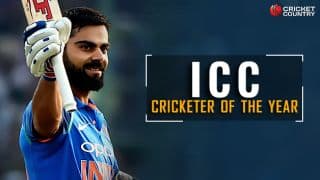