Ravindra Jadeja's spell of five for 36 inspired India to limit the dangerous West Indies batting line-up to 233 for nine in their ICC Champions Trophy 2013 encounter at The Oval, but the score could have been smaller had Darren Sammy not smashed his way to a quick fifty in the slog overs. Johnson Charles looked to take things away from India, but Jadeja came into the attack as his triple strikes dented West Indies and only Sammy's cameo helped them post a respectable total. 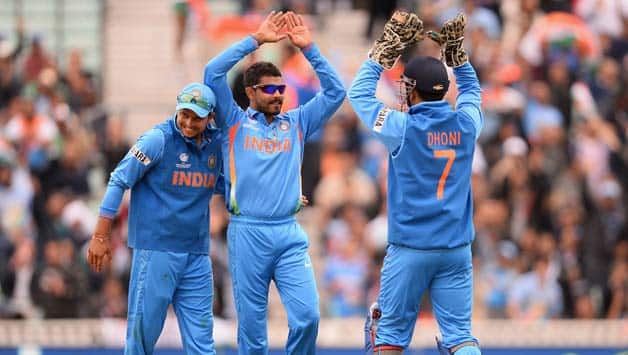 Ravindra Jadeja’s spell of five for 36 inspired India to limit the dangerous West Indies batting line-up to 233 for nine in their ICC Champions Trophy 2013 encounter at The Oval, but the score could have been smaller had Darren Sammy not smashed his way to a quick fifty in the slog overs. Johnson Charles looked to take things away from India, but Jadeja came into the attack as his triple strikes dented West Indies and only Sammy’s cameo helped them post a respectable total.

Indian captain Mahendra Singh Dhoni won the toss and elected to bowl first. India came into this game unchanged. West Indies were forced to change because of Denesh Ramdin’s suspension and Darren Sammy came in. Johnson Charles would don the gloves when the West Indies defend their total.

A vociferous crowd watched Chris Gayle enter the arena as they expected a sterling show. He started off with a bang, sending the ball down the ground with his trademark power. Just as he was getting stuck into Bhuvneshwar Kumar, the young swing bowler hit back by inducing an edge that carried to first slip. India breathed a huge sigh of relief.

At the other end, the young Johnson Charles was waiting to make a mark. Gayle’s dismissal didn’t deter Charles as he took to the task of attacking. He was moving at the crease and fearlessly lofted the bowlers high in the ‘V’. Darren Bravo was going slow at the other even as Charles made merry.

Charles got to his fifty off 46 balls and India weren’t able to contain him. Even after he got to fifty, he showed the intent by smashing a six. But, then came the turning point. The man with the golden arm – Ravindra Jadeja came into the attack and bowled Charles for 60.

The left-armer wasn’t done there as he trapped Marlon Samuels leg before – a review that went in India’s favour. Aleem Dar had initially ruled him not out, but Dhoni called for the review and replays indicated that the ball hit the pad first and was going on to hit the leg-stump. West Indies slumped further as Jadeja had Ramnaresh Sarwan caught down the leg-side. From 103 for one, they had slipped to 109 for four.

Dwayne Bravo, the captain joined his younger brother in the middle and they started rebuilding. Darren Bravo continued to struggle and Ravichandran Ashwin ended his stay with a deceptive flighted delivery. Dhoni stumped him as the batsman was stranded in the middle.

In came Kieron Pollard and India could sense a bit of danger. After all, two power players were in the centre. Pollard played out a few dot balls and then suddenly carted two sixes off Ashwin. In an attempt to accelerate, Bravo pulled one straight down deep square-leg’s throat off Umesh Yadav. Pollard fell soon after as he spooned a catch to long-on.

Jadeja then returned to complete a five-for as he dismissed Sunil Narine and then bowled Ravi Rampaul. Darren Sammy fought hard and a few big hits from his blade pushed West Indies past the 200 mark. However, in the penultimate over, he destroyed Ishant Sharma. The over started off with a four through the covers. Sammy then lofted Ishant high over long-off for six.

Fortune favoured him as an edge flew past third-man for four. The next ball was bludgeoned over Ishan’t head for another maximum.

In the next over, he spoilt Jadeja’s figures as he hit a six and two fours to complete his brisk fifty. He was visibly happy with this knock as he only came into the side after Ramdin’s suspension.

Will that blitz be enough for the West Indies? Or would India sail through? It won’t be the easiest task for them against a strong West Indian bowling attack.