England scored 269 for six against Australia in the first Group A match of ICC Champions Trophy 2013 at Edgbaston on Saturday.

England won by 48 runs
Man of the Match: Ian Bell 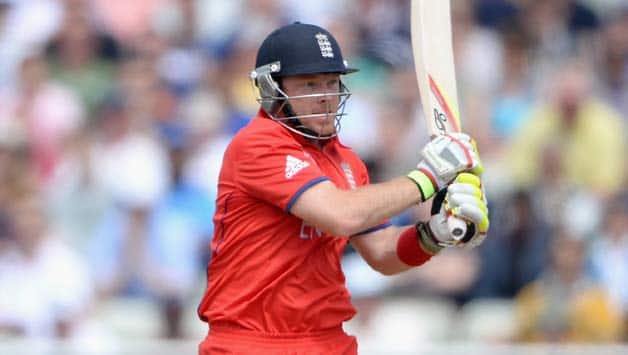 England scored 269 for six against Australia in the first Group A match of ICC Champions Trophy 2013 at Edgbaston on Saturday.

Opener Ian Bell top-scored with 91, while Jonathan Trott scored 43. Ravi Bopara scored an unbeaten 46 after England had lost the plot losing quick wickets in the middle over.

This is Edgbaston’s 100th ODI. The start to this historic day was amidst bright sunshine; a benign surface was on offer. There was no lateral movement and batting looked an easy pursuit. England’s opening partnership of Alastair Cook and Bell looked at ease.

For Australia, Mitchell Johnson was bowling a tight line and length but at the other end Mitchell Starc was a tad expensive. In his second over, Starc overstepped, bowled a wide delivery to let the pressure off Bell. The Australian fielding was sharp. When Cook played Starc to backward point, Bell thought it was an easy single but David Warner dived and threw at the wrong end. Both the batsmen were stranded at one end. The throw hit the stumps at Cook’s end and the ball ricocheted off the stumps and Bell got a life, and England got two runs.

Cook looked positive. He peppered the off-side field and was middling the ball. When things looked ominous for Australia, all-rounder Shane Watson removed England captain for 30. Cook went after a wide delivery that was pitched up. The faulty shot induced a thin edge which was taken by wicket-keeper Matthew Wade. The opening partnership put on 57.

The onus of carrying on the promising start was on two Warwickshire men — Bell and No. 3 batsman Jonathan Trott who is fresh from an ODI ton against New Zealand. The duo started to accumulate runs; their partnership was blossoming but Australia kept the run-rate in check. The Australian attack comprised six medium pace bowlers. The bowling looked one-dimensional. Skipper George Bailey summoned part-time bowler Adam Voges, who was allowed to settle in; he gave away only 13 off his three overs.

England had a solid platform. The second wicket stand of 111 off 22 overs was cut short when Trott flashed hard to a wide delivery off Starc. He was caught behind for 43 off 56 balls. Joe Root came in to bat at No. 4. Bell, by this time, was well-set. He had brought up his 27th ODI half-century and he looked determined to convert it into a century.

Against the run of play, England lost the momentum in the mandatory batting Powerplay overs. In the 38th over, Bell missed a straight delivery off Faulkner and was castled for 91. In the next over problems for England compounded when Root played an uppish drive off Clint McKay which was caught at mid-wicket by Bailey. Eoin Morgan and Ravi Bopara looked at consolidation.

Just when England looked like pressing on the accelerator, wickets fell. Morgan and hero of England’s last match Jos Buttler were out in quick successions. Morgan shuffled and tried to execute the wristy flick but was bowled off McKay. Buttler inside-edged Faulkner onto stumps and was dismissed for one. At 213 for 6 in the 44th over, England’s immediate concern was to bat out 50 overs. Bopara was still out there and he was joined by all-rounder Tim Bresnan.

The duo then stitched a half-century alliance. The Australian bowlers took a beating in the final overs. Forty-two runs were scored in the final five overs. Bopara finished with an unbeaten 46 off 37 balls.

For Australia, Faulkner and McKay picked up two wickets each. Starc was the most expensive bowler. He conceded 75 off his 10 overs.

Earlier, Cook won the toss and decided to bat on what looked like a dry surface for the first Group A match of the Champions Trophy. England dropped Steven Finn, who returned for the final ODI against New Zealand after suffering shin soreness. Graeme Swann was out ruled out of the game courtesy of a sore back. James Tredwell, who picked up three wickets against New Zealand in the third ODI, replaced Swann. Bopara, who batted at No. 6 and Joe Root will be expected to play the role of the fifth bowler.