The new ODI rules and the conditions in England will force India to go in with five specialist bowlers in the upcoming Champions Trophy, according to captain Mahendra Singh Dhoni who reckons all-rounder Ravindra Jadeja will play a key role. 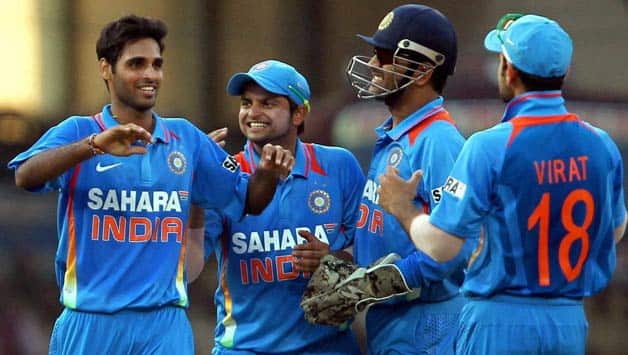 The new ODI rules and the conditions in England will force India to go in with five specialist bowlers in the upcoming Champions Trophy, according to captain Mahendra Singh Dhoni who reckons all-rounder Ravindra Jadeja will play a key role.

“Conditions are very different compared to sub-continent. We have to look at the composition of the side and see what kind of bowlers we use, but the conditions and the new rule forces us to play with five bowlers”, Dhoni said at the pre-tournament press conference.

“Jadeja gives us the balance that we really need. He is a great asset to have with his 10 overs of spin bowling and batting down the order,” Dhoni said.

“We are hoping Jadeja fires or else we have a few others,” he added.

Rohit Sharma was promoted to open the innings during the ODI series against England at home but the skipper indicated that Murali Vijay and Shikhar Dhawan will start off in the tournament.

“It’s good to have Shikhar and Vijay back in the side. They both scored runs in Test matches against a good side. Vijay had a decent IPL whereas Shikhar did well after coming back from injury. It’s always better to start off with two proper openers. Rohit will be the back-up option while I consider Dinesh as a specialist middle-order batsman,” he explained.

India will be playing outside the sub-continent for the first time since the new rules have been implemented and Dhoni is a touch worried.

“We have to see what kind of squad we have got. How quickly the players adapt. We have to plan the composition of our squad depending on the talent that we have. As of now, no one has got niggles and it’s always important to have full squad fit so that you are not forced to field your second XI.”

Asked about the impact that young Bhuvneshwar Kumar will have in English conditions, Dhoni said, “He is someone who can swing the ball both ways. He has plenty of cricket in front of him and he will have to face the challenges. With new balls used from both ends, it will be a challenge to bowl between 5th and 8th overs.”

Chennai Super Kings were beaten hands down in the IPL final to Mumbai Indians and Dhoni attributed that to poor batting.

“Twenty20 format is lottery where you have to be at your best on that particular day. We didn’t really bat well in the final. Now that that format has changed, it will be very different from what we have seen till now,” Dhoni said, when asked whether losing IPL final would hurt the national team in Champions Trophy.

Terming the Champions Trophy as a “tough tournament”, Dhoni stated that since the advent of Twenty20, it has been a real challenge for the international teams to juggle across all formats.

“If you look at the itinerary, we have a World T20 every alternate year followed by [a] 50-over World Cup and also the Asia Cup that we play. Champions Trophy is always a tough tournament as all the top teams play. But this tournament also provides plenty of experience to youngsters.”

India’s performance in tournaments held just after IPL has been far from impressive and the skipper doesn’t want to blame the fatigue factor that one associates with cash-rich league.

“I would like to look at the positives. The Indian players get exposure to play the best bowlers in the world right from Dale Steyn. The IPL helps us to stay in touch and good rhythm. Also the travelling was not very hectic as the hospitality is good. Yes, we have the stats against us but we need to improve that.”

The skipper said that two warm-up matches ahead of the tournament “should be good enough”.

Asked whether he has any point to prove, he replied,” That’s what international cricket is all about. In every assignment, we have a point to prove. We play for pride of our people.”