Kumar Sangakkara's ton [134 off 135 balls] powered Sri Lanka to a seven-wicket win over England in Group 'A' encounter of ICC Champions Trophy at the Oval on Thursday. Kumar Sangakkara‘s ton [134 off 135 balls] powered Sri Lanka to a seven-wicket win over England in Group ‘A’ encounter of ICC Champions Trophy at the Oval on Thursday.

Nuwan Kulasekara‘s quickfire fifty [58 off 38 balls] provided the much needed impetus in the massive run-chase and tilted the balance towards Sri Lanka’s favour.

Chasing 294, Sri Lanka got off to a bad start losing opener Kusal Perera in the third over of the innings. Perera tried to execute the pick-up shot against James Anderson but the ball took the bottom of his bat and the ball went straight to mid-on. At 10 for one in the third over, Sri Lanka needed a big partnership.

Tillakaratne Dilshan looked scratchy as he gloved the ball to Stuart Broad’s bouncer which went over the head of wicket-keeper Jos Buttler. Sangakkara played and missed in the beginning but looked in sublime touch whenever he went for his shots. He kickstarted his innings with a pull shot off Anderson. The southpaw took some calculated chances as well. He charged down the track and lifted Broad over point for a boundary. The next ball was glanced fine for another four.

The Sri Lankan duo was a tad cautious. They got their eyes in. In the 15th over, there was a shift of momentum when part-time spinner Joe Root was taken to the cleaners. Dilshan swept the first delivery for a boundary then danced down the track and lofted Root straight for a six. In the same over, Sangakkara punched a short delivery uppishly down the ground for another boundary. Seventeen runs in the over gave Sri Lankan run-chase much needed fillip.

The responsible knock of Dilshan [44 from 56 balls] was nipped in the bud by Graeme Swann. A couple of quiet overs made Dilshan play an impetuous shot. He gave Swann the charge and was beaten in the flight yet Dilshan carried on with his shot and was caught at long-on.

Mahela Jayawardene, batting at No 4, started off vigilantly. He bided time and played out a few frugal overs. Sangakkara concentrated on the singles. Sri Lanka’s ploy was to preserve wickets in hand and take advantage of the Batting Powerplay. Jayawardene broke the shackles by smashing Broad over long-on for a six. In Broad’s next over [30th of the innings] Jayawardene effortlessly flicked the delivery in between long-leg and deep square-leg. In the same over the short ball was contemptuously pulled in the same area behind square-leg for another boundary.

In the 35th over Sri Lanka took the mandatory Batting Powerplay. Jayawardene was dismissed for 42, trying to hook Anderson’s delivery which was caught at deep square-leg. Sri Lanka sent pinch-hitter Nuwan Kulasekara to take advantage of the Powerplay overs. He was unable to connect the ball, as he was trying to hit the ball hard. Tim Bresnan beat him with his change of pace.

Sangakkara was going strong at the other end. He brought his 15th ODI hundred in the 39th over of the innings. The last ball of the 40th over was hammered over mid-wicket by Sangakkara for a boundary. That left Sri Lanka to get 76 off their final 10 overs.

Kulasekara took the pressure off Sangakkara by playing the big shots. In Swann’s comeback over Kulasekara hit two sixes — a pull over mid-wicket and a slog-sweep in the same direction. In the next over the Sri Lankan all-rounder hooked Broad for a six. The required run-rate was well below six runs per over. Sri Lanka chased down the target without too many jitters and got the important two points.

Sri Lanka’s win opens up the competition and the last games of every team in Group ‘A’ now is a virtual quarter-final. 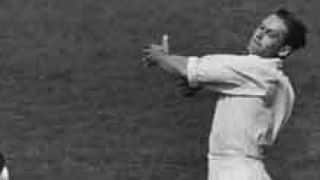