Stunned by an inspired Sri Lanka in their last game, hosts England find themselves in a spot of bother when they take on New Zealand in a must-win Group A match of the ICC Champions Trophy at Cardiff on Sunday. 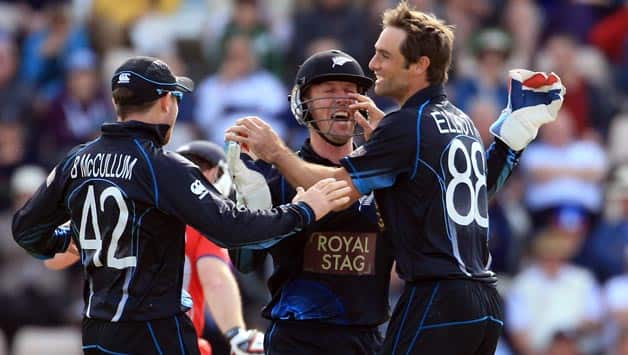 Even if New Zealand lose, they still have an outside chance of entering the semifinals provided Australia beat Sri Lanka in their final encounter © Getty Images

Stunned by an inspired Sri Lanka in their last game, hosts England find themselves in a spot of bother when they take on New Zealand in a must-win Group A match of the ICC Champions Trophy at Cardiff on Sunday.

England, one of the strong contenders for the trophy, had themselves to blame as their strong bowling attack failed to defend an imposing 293 for seven against Sri Lanka.

The English bowling attack, termed as second best in the competition after Pakistan, came a cropper against Sri Lanka the other day as Kumar Sangakkara hit an unbeaten century to ensure an emphatic seven wicket win for the island nation with 17 balls to spare.

The loss against Sri Lanka had put the hosts in a dicey situation after the game between Australia and New Zealand was washed out on Wednesday.

The Group A is still wide open as all the four teams — New Zealand (3 points), England (2), Sri Lanka (2) and Australia (1) are in the reckoning for the two semifinal spots from the group.

England will consider Sunday’s game as a virtual quarterfinal as only a win will guarantee their place in the knockout stage irrespective of the result of the remaining group matches.

But the hosts will be under more pressure than New Zealand as even if the Kiwis lose, they still have an outside chance of entering the semifinals provided Australia beat Sri Lanka in their final encounter.

With scores of 269 and 293 in their last two games, England’s batting looks in good touch.

England’s top-order comprising captain Alastair Cook, Ian Bell, Jonathan Trott, young Joe Root and Ravi Bopara all are among runs and it won’t be surprise to see the hosts piling up yet another big score in conditions which are familiar to them.

England would also be eying revenge against the Kiwis who defeated them 2-1 at their home soil in the bilateral ODI series just ahead of the Champions Trophy.

But England has to deal with an injury concern as Jonathan Trott is uncertain to play against New Zealand.Trott was off the field for much of Sri Lanka’s innings because of a tight right quad.

Besides Trott, England could also be without seamer and hard-hitting lower-order batsman Tim Bresnan, whose wife is due to give birth to the couple’s first child anytime.

If Bresnan does not play, it would open up a place in the attack for either fast bowler Steven Finn or off-spinner James Tredwell.

New Zealand, on the other hand, are placed much better as despite a loss tomorrow, they still can progress to the semifinals provided results of the last Group A match between Australia and Sri Lanka go in their favour.

To add to it, New Zealand would have by now acclimatized to the English condition having played in the country since the last one month.

Batting is an area which is a cause of concern for New Zealand so far in this tournament.

Martin Guptil, who had an outstanding series against England, has failed to leave his mark in the first two games of the tournament, while Ross Taylor and skipper Brendon McCullum too are not among runs.

McClenaghan, in particular, has blossomed in seam-friendly English conditions returning with four-wicket hauls in their opeining two matches of Group A.