South Africa skipper AB de Villiers feels India opener Shikhar Dhawan has got a lot of potential and will get better as his career goes on. 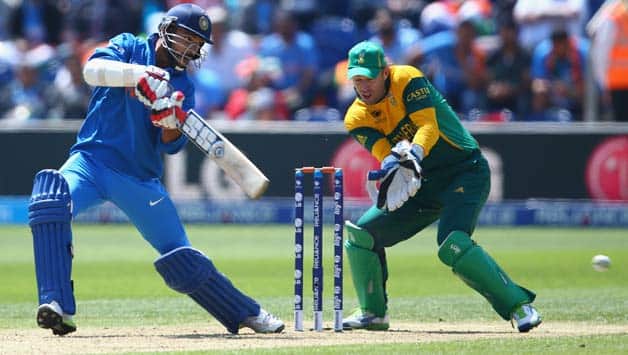 South Africa skipper AB de Villiers feels India opener Shikhar Dhawan has got a lot of potential and will get better as his career goes on.

“Shikhar and I played with Delhi Daredevils. I know his game quite well; he’s a very talented individual. He played really well on Thursday. He’s got the whole package, and I’m sure he’ll get better as his career goes on. He’s a good player, and unfortunately, we couldn’t get him out at the right time. But that’s not where we went wrong,” de Villiers was quoted as saying in www.icc-cricket.com.

De Villiers had earlier said that South Africa attacked India like a pack of wolves. However, Dhawan and Rohit Sharma steered the Indian openings, putting up 127 runs for the first-wicket partnership.

De Villiers said, “Yes, there was 100 per cent of a pack of wolves out there. Like I said before, I was very proud of the way the boys fought back, especially after losing Morne Morkel. It was a great fight back and the energy was high right throughout.”

“We didn’t get a lot of opportunities for run outs and things like that. But every time I connected with the team, the energy, and intent and their awareness was there. I’m very proud at the fact we kept them down to 330. It could have easily been 360 or 370, which could have taken the game out of reach for us.”

Talking about the way India played, de Villiers said, “They didn’t show a lot of aggression, but I thought they didn’t bowl too badly.  We got off to a flier of a start. I thought we had the upper hand then. It’s difficult to give a lot of credit when you’re playing better than the opposition. I think we had 77 in the first 10 overs, so we played quite well. But still I’ve seen a lot of them in the recent past, in the Indian Premier League (IPL), I’ve seen them bowling really well. There is a lot of talent in the Indian seam bowling attack.”

“And Rohit Sharma, wasn’t too surprised he was the other option. It was either him or Murali Vijay, and we know both the players quite well. We actually looked at both the players before the game what their strengths and weaknesses are. So we were expecting the unexpected and we got a little bit of that,” he added.

When asked about sending Colin Ingram in place of Alviro Petersen, de Villiers said, “Over the last few games we’ve watched both players closely. Colin is probably in a little bit of better form, and he showed more confidence in the last two games and in the nets, so we went on that. And Colin has been in the earlier five, and I thought it was fair to keep him on the team ahead of Rory. We’ll obviously reassess and have a look at the team going into the next game.”

The 29-year-old South African said that the match against Pakistan will be a do-or-die match.

“We were definitely going there to win. We’ll have to keep that aggressive mindset that we had. It is basically do or die. We’d like to win at least two out of the three. When you go one out of three, net run-rate and things like that coming into play. We wouldn’t like to have that. Even two out of three you might have that.”

“Each game we play here we have to try to win it. It’s a short tournament. There is no room for errors, except against India, and we’ll try to repair that in the next game and go for a big one.”

De Villiers said that South Africa will reassess where they went wrong. However, he also clarified that he doesn’t mind the players having an aggressive mindset and he was proud of the way the team fought back.

“We’ll go back to the drawing board and reassess where we went wrong, but I don’t mind the guys having an aggressive mindset.  I’m very proud of the way we fought back.  We got five wickets in a very short period of time in the middle-overs.  Then I think that was probably the short ball paying off and something coming our way because of that, because of us having that aggressive mindset right throughout the game.”

De Villiers felt there were moments when he felt his team could have won.

“I’m quite disappointed with what happened.  After being down and out in the first 50 overs, beyond the eight ball, to restrict them to 330 was first of all a great effort, and then to get ourselves into a winning position was even better.”

“Unfortunately, there were a couple of run-outs, unforced errors, but I take a lot of positives out of this game.  I’m not going to sulk too much.  We’ll try to learn from our mistakes, and we’ve got a massive game against Pakistan. We’ve played them a lot in the recent past, and we know the areas we’re going to attack.  And a bit more from I’d like to see a bit more from the positive cricket that we’ve played on Thursday in the next one.”

De Villiers explained the unforced errors. “The couple of run outs were probably unforced and due to miscommunication.  In the heat of battle sometimes you’re so eager to do well for your team and you’re just not always on the same mind wave – or whatever you call it – than your partner at the other side.  Unfortunately, there were a couple of misunderstandings out there, which is understandable sometimes under pressure and in the heat of battle.  But it was unforced and cost us dearly, unfortunately.”

Match-fixing before IPL: Alfred Mynn’s misdemeanours in 1840s and 1850s