South Africa scored 230 for six in 31 overs against West Indies in a Group 'B' encounter of ICC Champions Trophy 2013 at Cardiff in a rain-curtailed tie on Friday. 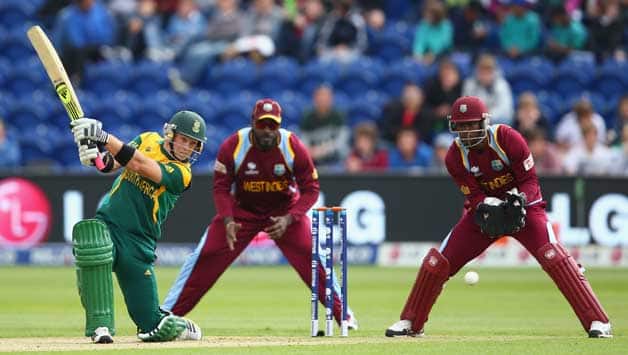 South Africa scored 230 for six in 31 overs against West Indies in a Group ‘B’ encounter of ICC Champions Trophy 2013 at Cardiff in a rain-curtailed tie on Friday.

For South Africa, Colin Ingram (73 off 63 balls) was the top-scorer. The 80-run opening partnership between Ingram and Hashim Amla gave South Africa a solid platform. After South Africa lost their way in the middle, a 68-run alliance between Faf du Plessis and David Miller helped South Africa post a challenging total.

Ingram then took over the role of the aggressor. He charged down the track to Sunil Narine and deposited him over long-on. He punished Darren Sammy who was bowling a tad short. Sammy’s length ball was deposited over his head for a six, while his short delivery was pulled contemptuously over mid-wicket. Ingram brought his half-century off 46 deliveries.

Amla, who was playing the sheet-anchor’s roll, tried to press on the accelerator going inside-out against part-time off-spinner Marlon Samuels. Chris Gayle, standing at covers, juggled the ball twice before taking the catch cleanly. AB de Villiers promoted himself at No. 3. Ingram was controlling the South African innings. He was harsh on the spinners. Narine and Samuels’ short deliveries were cut for boundaries — the first one beat the short third-man, while the second pierced the narroaw gap between short third-man and point.

Best, who bowled at a fiery pace, was introduced in the attack [in the 17th over of the innings] to break the partnership. He tried to bounce out de Villiers but the ball took the South African captain’s top-edge and flew over fine-leg’s head for a six. The next delivery was an attempted yorker, which turned out to be a benign full-toss and was caressed through covers for a boundary.

Pollard dismissed Ingram in his first over. Ingram attempted to hit Pollard towards mid-wicket but the ball was a slower delivery. Ingram skied the ball, which was held by deep mid-wicket. JP Duminy was out in the next over trying to pull Dwayne Bravo’s short ball. He gloved it to wicket-keeper Johnson Charles. Soon, AB de Villiers’ mistimed pull was caught by Darren Bravo diving to his right at mid-wicket.

Faf du Plessis and David Miller looked to take advantage of the solid foundation laid by the South African top-order. Miller took on Narine in his final over (26th over of the innings). A short delivery from Narine was thwacked past covers and a length delivery was lifted over long-on for a six.

In the 27th over South Africa took the Batting Powerplay — a three over period of play where they looked to press on the accelerator. The three overs yielded 29 runs. The first over from Rampaul went for 14. Pollard bowled a quiet second over conceding only five runs. The final Powerplay over went for 10; Miller hit a big hit over long-on in that over and things looked ominous for West Indies.

In the final over, du Plessis and Miller were dismissed but their promising fifth wicket alliance had helped South Africa post an enterprising alliance (68 off 48 deliveries).

Earlier, the toss was delayed by three hours and fifteen minutes at Sophia Gardens. When it actually took place, West Indies opted to bowl on conditions which looked like favouring the seamers. West Indies made a couple of changes — Tino Best replaced an ill Kemar Roach and Ramnaresh Sarwan who scored couple of ones made way for Devon Smith.

South Africa’s unit was bolstered by the comeback of Dale Steyn, who has recovered from a side strain. He replaced the left-arm spinner Aaron Phangiso.

The match was reduced by 19 overs each way, with the Powerplay adjusted to nine overs a side, with six mandatory overs upfront, and three for the batting Powerplay. The winner of this will proceed to the semi-finals while the team that loses will be eliminated from the Champions Trophy.