Captain AB de Villiers has apologised for South Africa's failure to reach the semi-finals of the ongoing ICC Champions Trophy.

Durban: Captain AB de Villiers has apologised for South Africa‘s failure to reach the semi-finals of the ongoing ICC Champions Trophy cricket tournament in England and Wales. South Africa, featuring in Group B of the competition, managed to only beat Sri Lanka, while losing to India and Pakistan as they failed to advance from the group stage. Despite always being termed as favourites, South Africa haven’t won an ICC tournament since the 1998 Champions Trophy triumph in Bangladesh, earning the tagline of ‘chokers’. The right-handed batsman, considered a modern-day cricket great, wrote on Facebook on Tuesday: “We are truly and genuinely sorry about the way we performed in 2017s Champions Trophy and we will keep working hard at our game to make it right!” ICC Champions Trophy 2017: Team has let AB de Villiers down, feels Faf du Plessis

However, Faf du Plessis showed confidence in the current squad and also backed skipper AB de Villiers, who was criticised for his captaincy skills in ODIs. Du Plessis pointed out that failure of handling the task at hand well was one of the reasons for their poor performance in the tournament. Du Plessis recollected the lowest point of his career after 2015 defeat against New Zealand and recited the incident to ESPNcricinfo.com, In 2015, I sat afterwards and I was extremely disappointed. It was the lowest point of my career because I felt that was our time to win a tournament. We played a good game of cricket that night. We were right in it until the end. On Sunday, I didn t feel the same. I feel extremely disappointed with the way we played. We didn t pitch up as a team. 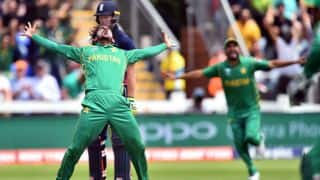