ICC Champions Trophy 2017: South Africa's innings, versus Pakistan, was held single-handedly by David Miller. On the other hand, AB de Villiers fell for a first-ball duck.

AB de Villiers is “due” a big score against title-holders India in ongoing ICC Champions Trophy 2017 according to fellow South Africa batsman David Miller after Proteas’ skipper suffered the first golden duck in ODIs. De Villiers’s maiden first-ball exit in 212 innings came during South Africa’s shocking 19-run loss (DLS method) to Pakistan at Edgbaston on Wednesday — a result that threw Group B wide open. Only the top two sides in each of the two pools will go through to the semi-finals of a tournament featuring the world’s top eight 50-over nations. That makes Sunday’s clash with India at the Oval potentially pivotal to a South Africa side who beat Sri Lanka in their group opener. AB de Villiers gets dismissed for 1st golden duck of his ODI career in ICC Champions Trophy 2017, Group B fixture vs Pakistan

Miller’s unbeaten 75 was the batting highlight of a below par total of 219 for eight against Pakistan, an innings where de Villiers sliced left-arm spinner Imad Wasim to backward point. Star batsman de Villiers, also nursing a hamstring problem, has now managed just four runs this tournament. But Miller is confident this is just a blip for the usually prolific 33-year-old right-hander.

“He’s the best player in the world so it’s nice when he does perform 95 percent of the time. But I haven’t seen him go out for nought too many times in his career. He’s human. There’s enough good batsmen in the team to contribute at the same time. I don’t think it’s really a huge problem at all. We’ve done well over the last two, two-and-a-half years as a top six. All the batsmen we have can do a job. AB didn’t come off but he’s definitely due (a big score) on Sunday”, said Miller.

With de Villiers, for so long a key figure in all three international formats, opting out of Test cricket for the rest of the year because of the strain of his workload, questions have been raised about the course of his career. He will be eager to make the most of the opportunity in a must-win clash against India. 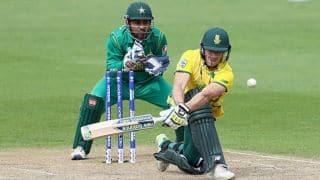 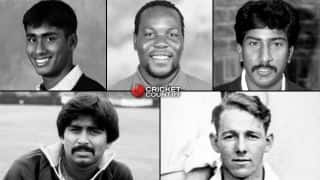 The Fabulous Five: Story of youngest centurions on Test debut